When he is diagnosed with a life-threatening heart condition at the age of seventeen, Asa is certain that his adventures have come to an end. He is alone, having been abandoned by parents who never wanted him and a village that couldn’t raise him. However, as the bells start to ring, those are the least of his problems. The evil sorcerer Erebus has the land of Eodem under his control. Thrust into a world of distrust and aggression, Asa can rely on just one person: his friend Averett. The wall that divides Eodem seems to be an unobtainable goal, and danger is always one step ahead.

Welcome to my stop on the blog tour for His Frozen Fingertips. I have an extract from the book to share today. 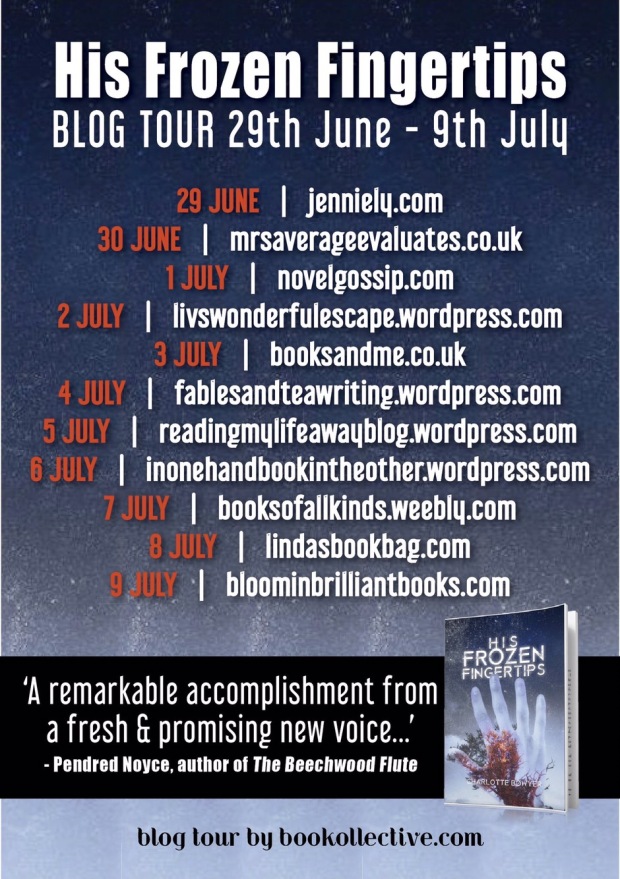 The path down the other side of the mountain was steeper than the one that they had taken before. The air was dustily dry and growing thicker the closer they drew towards the ground. It was warm and fresh, a combination of traits that Asa never thought he would consider air to be. The wind was more condensed than it had been. It ruffled their hair and tugged on their garments, as if it wanted to pull them away when it was strong enough.

The ground was soft underfoot, covered in a blanket of grass. A loch lay to their left, curling around the side of one mountain and being fed from a stream that tumbled into its depths. Trees were scattered everywhere—thin with sparse leaves that allowed dappled light to shine through. The valley was quiet, and for the first time since Kaspar had left them, Asa could hear the muffled sounds of a world beyond their own. Birds sang to each other as they darted through the branches, insects hummed beneath their feet. It was as if a muffler had been lifted from their ears and now they could hear the world living.

It wasn’t long before the shadows were growing longer, though there was no sun to be seen wherever they looked. Asa knelt by the shimmering surface of the loch, drinking the water from cupped hands. It was cool and refreshing to his parched tongue. Avery was lighting a fire behind him, he could hear the strikes of flint on steel, and after a few clinks the hiss of flames catching to the kindling. The leather satchel that Avery had been carrying, Kaspar having departed with the other, was showing signs of the long journey it had taken. Its leather was cracked and peeling, worn through to cloth-like thinness in some areas. Asa saw Avery remove some of the disgusting nutritional biscuits from a cloth bag. He smiled apologetically.

“There’s nothing else left.”

Asa nodded, taking the biscuit and collapsing on the grass next to his friend. The stars were out again that night. They sparkled tantalisingly above them, just out of reach. Avery mouthed some words under his breath, laughing at Asa’s confused glance towards him.

“What was that?” Asa inquired, chuckling unsurely. Avery indicated a star that shone only just over their heads. It was the brightest in the whole sky.

“The clouds have cleared. I just remembered that from here one can see Boreas. The star of the north.” He pointed at a particularly bright star that shone in the direction that they were travelling and sighed. “Eurus. My mother loves that star. Had I been born when Eurus was in our charts, that would have been my name.”

Asa squinted up at the blanket of glittering black. He could not fathom how anyone could see the difference between the tiny beads of light.

“You don’t just start off knowing them,” Avery explained. “It’s like reading. Where you read your letters on a page, I read the sky. If you know one constellation then you are able to map out any other that you may come across. You’re a mapper, aren’t you? Then this should be easy enough.”

“It’s called being a cartographer,” Asa said. “But I don’t map the skies. I draw streets, fields. It’s linear work, simple enough for someone like me.”

“Believe in this for one night, Asa.” Avery pointed to a line of stars close together above their heads. “That’s the waist of Harloziel, the warrior. See how you can trace the shape of her body? Her arm is drawing a bow. From the bow you may trace the top of her head, and then you can see her fully. And it all came from learning that her waist is made of the five king stars that I pointed out now. Learning these patterns is like learning the alphabet. It’s essential if you want to see the bigger picture.”

A streak of light shot across the sky in front of them. Asa twitched for his sword, safe against his leg, but Avery grabbed his arm.

As the final vestiges of day left the sky, the air around them seemed to come to life. Tiny insects flickered in front of them, their brightness illuminating their faces in the darkness.

Asa smiled as he looked at his best friend. They were still here, despite all of the odds. He had never been so happy to be with a person, not in his whole life.

“Do you wish on fireflies?” he asked casually.

“What would you wish, just suppose that you could?”

“I don’t know.” Avery was quiet for a moment. “To go home, see my mother again? Maybe I would start a garden and grow my own vegetables; that has always seemed like a good dream. Not for necessity or anything, just because I could. What would you wish for?”

“Something a bit more immediate.” Asa’s eyes were fixated on the blond’s lips. “You know, in case neither of us live to see tomorrow. Life’s too short. I want something that I can have right now.”

“What do you mean?” Avery rolled his eyes, before Asa cut him off, pressing their lips together. “Oh.”

It wasn’t the hasty embarrassment that had been their first kiss, or either of the quick pecks that they had enjoyed since. Only the stars were there to watch them as they sat there, both crossing their legs so that their knees touched. The world around them seemed to have faded and slowed, nothing could matter outside of this. Erebus was nothing but a word; his influence was null and void when the two of them were together. They were unstoppable.

They reluctantly broke apart, the world shifting back into sharp focus. Asa squirmed away from Avery as he brushed a lock of hair from the nape of his neck, though neither of them said a word. They made no pretence of not linking fingers that night. The air was still warm though the wind was high, and after an indeterminably long time watching the fluttering fireflies, Asa let his eyes drift shut.