When a car is pulled from raging floodwaters with a dead man in the front and the decapitated body of an evil woman in the boot, Cumbria’s Major Crimes Team are handed the investigation.

The woman is soon recognised, but the man cannot be identified and this leads the team and their former leader, Harry Evans, into areas none of them want to visit.

Before they know it, they’re dealing with protection scams and looking for answers to questions they didn’t know needed to be asked.

I’m so pleased to be one of the stops on the blog blitz for When the Waters Recede today!

While I’m a big fan of Smith’s other series (Jake Boulder) I hadn’t read any of the previous books in this series until now. I didn’t have any problem starting at this point though, there was enough pertinent background information shared that I caught on fairly fast. I will say that the cast of characters history does seem rather interesting though so reading them in order seems like it would be fantastic.

Evans is exactly the type of lead character that I love in a police procedural, he’s reckless and sarcastic, but best of all he’s unpredictable and nothing keeps the reader on their toes more than a loose cannon. There are a lot of moving parts and various sub plots going on here for Evans and team, though I guess technically it’s not exactly his team anymore as he’s now retired and working as a consultant to the police. This was an interesting angle, he’s still working alongside his old colleagues but he’s a bit wrong footed and his team is as well. They’re not used to reporting to someone other than him and often find themselves deferring to him subconsciously. Lauren is a member of said team and I loved her character. There’s a personal story at play here that allowed me to really get to know her in a short period of time and I really liked what I saw.

This was just such an interesting read with so many various angles to follow, I fear saying more but it was exciting and extremely well plotted. I’m a firm fan of Smith’s work and will now continue to follow this series as closely as his JB one, definitely give this a try if you’re looking for a unique crime thriller from a writer with a very strong voice.

When the Waters Recede in three words: Controlled, Gritty and Solid.

Thanks to Rachel at Rachel’s Random Reasources and the author for my review copy.

Graham Smith is a time served joiner who has built bridges, houses, dug drains and slated roofs to make ends meet. Since Christmas 2000, he has been manager of a busy hotel and wedding venue near Gretna Green, Scotland.

An avid fan of crime fiction since being given one of Enid Blyton’s Famous Five books at the age of eight, he has also been a regular reviewer and interviewer for the well-respected website Crimesquad.com since 2009

Graham is the founder of Crime and Publishment, a weekend of crime-writing classes which includes the chance for attendees to pitch their novels to agents and publishers. Since the first weekend in 2013, eight attendees have gone on to sign publishing contracts.

Graham can be found at 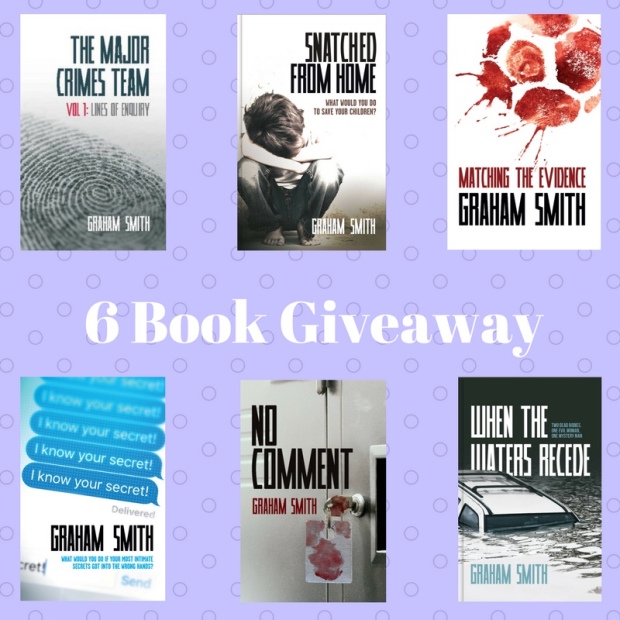 To celebrate the release of When the Waters Recede, Graham Smith is offering one lucky reader the chance to win all six books in the Harry Evans series.

To enter, simply sign up for his newsletter via the link provided before the 5th of June 2018 and you’ll be entered into not just this competition, but all competitions that he runs. Entrants from the whole world are welcome.

One thought on “Review: When the Waters Recede by Graham Smith @GrahamSmith1972 @Rararesources”