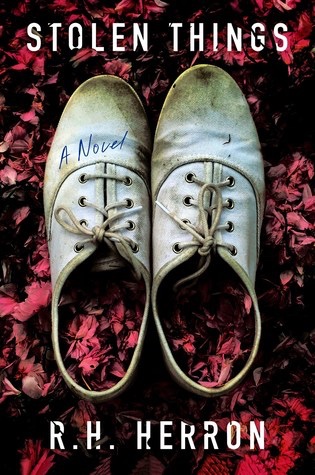 A sensational crime, a missing teen, and a mother and daughter with no one to trust but themselves come together in this shocking debut thriller by R. H. Herron.

Laurie Ahmadi has worked as a 911 police dispatcher in her quiet Northern California town for nearly two decades. She considers the department her family; her husband, Omid, is its first Arab American chief, and their teenaged daughter, Jojo, has grown up with the force. So when Laurie catches a 911 call and, to her horror, it’s Jojo, the whole department springs into action.

Jojo, drugged, disoriented, and in pain, doesn’t remember how she ended up at the home of Kevin Leeds, a pro football player famous for his on-the-field activism and his work with the CapB—“Citizens Against Police Brutality”—movement. She doesn’t know what happened to Kevin’s friend and trainer, whose beaten corpse is also discovered in the house. And she has no idea where her best friend Harper, who was with her earlier in the evening, could be.

But when Jojo begins to dive into Harper’s social media to look for clues to her whereabouts, Jojo uncovers a shocking secret that turns everything she knew about Harper—and the police department—on its head. With everything they thought they could rely on in question, Laurie and Jojo begin to realize that they can’t trust anyone to find Harper except themselves . . . and time is running out.

Thrillers and I have not been the best of friends lately, to say I’ve struggled with the majority of them is putting it mildly, so while I was definitely intrigued by the premise of this one, I was very hesitant. Thank god I set my hesitation to the side and gave this a fair chance, because it was excellent y’all! It’s much more than just a synopsis that sounds good and doesn’t actually deliver, what’s described is actually the tip of the iceberg and I was here for it the whole way through.

This is inspired by the authors time as a 911 dispatcher which was cool, it definitely gave the whole thing an air of authenticity, something that I always appreciate, especially in a sea of unbelievable thrillers. The action begins right from the start when Laurie gets an emergency call from her teenaged daughter and it never lets up for a second. The story unfolds at a rapid pace and then there are some seriously sharp twists and turns. This one definitely kept me guessing, but I was also invested as well, I not only wanted to know what would happen next, I cared about what would happen as well.

I’m going to go ahead and recommend this to anyone who has been struggling with thrillers as of late, it reeled me in instantly and was one of the only books I’ve read recently that I felt drawn to when I wasn’t reading it, the characters were calling to me even when I wasn’t reading! This probably would’ve even received a five star rating for me, but the ending felt a little rushed and I would’ve liked a little more closure, but overall a solid read.

Thanks to the publisher for my review copy