New from Laura Chapman, the third installment of her fantasy football romantic comedy Queen of the League series . . .

After rushing to the altar and moving across the country, Harper Duquaine (or is it MacLaughlin, now?) is in uncharted territory. What once seemed like a promising opportunity to advance her husband’s career while giving her some much needed independence and adventure has proven to be a bust. By the time fall rolls around again, she’s back in a boring job by day and overstocking her inventory of crocheted scarves by night. Not even the prospect of a new football season holds much excitement.

At least that’s what she thought. Harper suddenly finds herself the manager of not one but two fantasy football teams—each with its own set of drama. Between the added pressure of her new marriage, an unexpected career prospect, and the hiccups created by people from her past and present worlds, Harper quickly finds herself going from bored to overwhelmed.

Can she hold up under the pressure, or will Harper learn the hard way that the turf isn’t always greener on the other field? 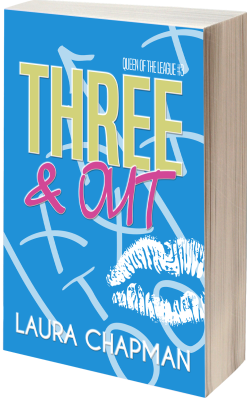 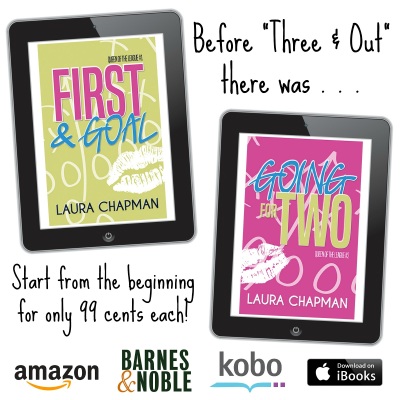 In Laura Chapman’s Queen of the League series, Harper Duquaine joins a fantasy football league to prove she can hang with the guys. Only problem: she doesn’t know a sleeper from a keeper (or any of the other lingo thrown her way). Her competitive streak soon emerges, and she catches the interest of her top two competitors. With a slew of conflicting advice in her real and fantasy worlds, Harper must figure out how to play the game and come out a winner. 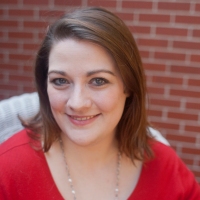 Laura Chapman is the author of First & Goal, Going for Two, Three & Out, and The Marrying Type.  Her holiday novellas Making Christmas and What Happens at Midnight will be released on November 8, and are now available for pre-order. A native Nebraskan, she loves football, Netflix marathons, and her cats, Jane and Bingley. Connect with her online on Facebook, Twitter, Instagram, and YouTube and on her website at www.laurachapmanbooks.com.

What’s a typical writing day for you look like? Describe your perfect writing environment.

When I’m heavily involved in a writing project, a typical day of writing includes a 30-minute writing sprint before I leave for the office every morning. I’ll do another one during my lunch break. Then I’ll sit down to write for a couple of hours in the evening. The time varies depending on how much I’m able to accomplish in a sitting. I tend to take frequent breaks during the evening, too, usually to watch something on Netflix. Friday Night Lights was my show of choice for First & Goal, The Mindy Project for Going for Two, and Frasier for Three & Out. That last one actually makes a little sense if you read the book. I also carry a notepad and my phone with me wherever I go, so I can jot down scenes or dictate dialogue while I’m on the move. As for my perfect writing environment, I am super flexible. I wrote my first book primarily on airplanes and in airports while I was traveling for work. I’ve written big chunks of my subsequent novels in cafes, coffee shops, and bars. I can also work well on my couch, at my desk, or in my bed or bathtub. I’m kind of a nomad with my writing, so my perfect writing environment is one that changes.

How did you get started writing? Was it something that you’ve always loved?

I’ve always been drawn to stories. I grew up in a family that loved books, movies, TV, and more books. I really can’t remember a time when I didn’t know that I wanted to be a writer or when I wasn’t studying the way other people told stories. I was so excited the first time I watched a DVD with director or writer commentary, because it gave me a chance to learn more about the decisions they made and why. I think I always knew I was going to write a book someday. Even though it’s such a huge part of my life now, I still sometimes can’t quite believe it’s what I do.

Who are your favorite writers/inspirations?

I am completely in awe of writers like Nora Roberts and Bella Andre who commit to a writing schedule and follow it. They are so prolific and it is because they are so dedicated to their work. Someday, I hope I get myself together enough to be more like them. I also really admire funny and gracious authors like Colleen Hoover and Rachel Hollis. They each have these amazing and unique personalities, and you can see just how grateful they are for their success. They definitely don’t seem to take anything for granted and are big on giving back. Plus, they’re all amazing storytellers. You have to admire that.

Anything you can tell us about upcoming projects?

On November 8 I will be releasing two standalone holiday novellas. These were previously published in a collection last year, but the publisher unfortunately closed, so they are getting new life this holiday season. I’m a huge Hallmark Christmas movie fan and Making Christmas and What Happens at Midnight are the result of that love. I have a sixth book in revisions. This one is more contemporary romance than romantic comedy, and… I want to tell you everything about it, but I can’t just yet. I am working on my seventh novel during National Novel Writing Month next month. I came up with the nuts and bolts of this story while waiting out rain in a cafe in Nantes, France.

Normally how do you develop plots/characters? Brief us on your process.

I usually come up with a concept first. Like for the Queen of the League series, I was halfway through my first fantasy football draft, and I thought, “Wouldn’t this make a great story?” From there, I create a wishlist of sorts, jotting down everything I’d hope to include in a story. (I actually have several of these files for stories that aren’t yet, and may never be, written.) From there I create character sketches for the primary characters, which include the basics, like what he or she looks and acts like, as well as somewhat detailed descriptions of their motivations and emotions. This helps me understand who they really are and why and how they would react in different situations. Next, I use a beat sheet to plot out the ten major scenes, which I use to create a character driven scene by scene outline. I use that as my roadmap for driving, though like on any good trip, sometimes I take detours or decide to nix or replace scenes if the story doesn’t need them.

Favorite character from one of your own novels?

You know, it’s maybe a toss-up between Blitz and J.J. from the Queen of the League series. That makes me laugh to think about, because I never would have guessed that when I started writing these stories. Blitz the cat closely resembles my little boy cat, Bingley, and he was a lot of fun to write. J.J., who is part villain, part friend, ended up surprising me a lot. Out of all the characters I’ve written, he is the one who evolved most from inception to where he is now in the story. He’s grown a lot, and he still has room for improvement. He’s complicated and kind of fascinating. I have a feeling I might not be done with his character yet, but time will tell.

I am in a deeply committed relationship with my phone, which keeps me connected via Facebook, Instagram, and Twitter. I love to hear from readers on all of these platforms, and I try to respond whenever possible.

On average, how long does it take you to write a book?

Each of my books have kind of been special snowflakes when it comes to how long it took to go from idea to published story. When it comes to writing a first draft, my books usually take about two months to write, though that can be spread out. (If I start the book in November for National Novel Writing Month, despite my best efforts, I tend to take off December and most of January for a February/March finish.) The biggest fluctuation comes in how long it takes me to plot out a story and revise it. I’m happy to say that my revising time is getting smaller. I hope it means I’m becoming a better writer, but it could also be that I’m doing a more thorough job plotting in the first place.

Which one of your characters do you relate to the most?

Probably Harper from the Queen of the League series. Though I sneak parts of myself into all of my characters, Harper probably most closely relates to me and the feelings of restlessness and indecision I had throughout most of my 20s (and even now that I’m 30). Like Harper, I really want to be a good, well-put-together person, but I constantly find myself straying.

If writing wasn’t your career what would you be doing?

I actually also have a second career working full-time as the communications coordinator for a museum. Still, that shares a lot of similarities with being an author. If I wasn’t a writer, I think I’d enjoy teaching. I have a ton of respect for teachers, and I love sharing my passions with others. It’s a lot of work and a tough job.

What’s the best compliment that you’ve received about your work?

I love it when I hear someone say one of my stories kept them up reading all night. As a fellow book lover, who has stayed up way too late reading something I couldn’t put down, that has to be the nicest compliment.

8 thoughts on “Release Week Blitz/Q & A: Three and Out by Laura Chapman @lchapmanwrites”