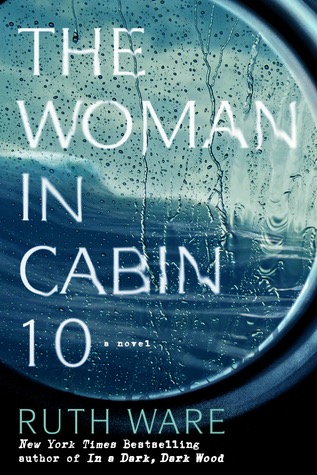 From New York Times bestselling author of the “twisty-mystery” (Vulture) novel In a Dark, Dark Wood, comes The Woman in Cabin 10, an equally suspenseful novel from Ruth Ware—this time, set at sea.

In this tightly wound story, Lo Blacklock, a journalist who writes for a travel magazine, has just been given the assignment of a lifetime: a week on a luxury cruise with only a handful of cabins. At first, Lo’s stay is nothing but pleasant: the cabins are plush, the dinner parties are sparkling, and the guests are elegant. But as the week wears on, frigid winds whip the deck, gray skies fall, and Lo witnesses what she can only describe as a nightmare: a woman being thrown overboard. The problem? All passengers remain accounted for—and so, the ship sails on as if nothing has happened, despite Lo’s desperate attempts to convey that something (or someone) has gone terribly, terribly wrong…

With surprising twists and a setting that proves as uncomfortably claustrophobic as it is eerily beautiful, Ruth Ware offers up another intense read.

In A Dark, Dark Wood was one of my favorite reads of 2015, so I was really curious about Ware’s sophomore novel. Would she be able to keep momentum with this one? Or would it end up being a huge disappointment after such a stellar debut? While I wasn’t as blown away by this one, I still thought it was good read.

Lo is a journalist who has been handed a plum assignment. She’s been invited to be a guest on the maiden voyage of a luxury cruise ship, Aurora. This wasn’t a typical city at sea type of cruise ship, but rather a smaller, boutique style craft with only ten guest cabins. On the first night aboard, Lo hears a woman scream and a splash and when she investigates, she swears she sees a hand disappear beneath the inky surface of the frigid water. Desperate to help whoever this woman is, Lo tries to enlist the help of the crew and guests. But no one seems to believe her as there are no missing guests or crew members.

I loved the premise for this novel. Is Lo crazy, did she really see and hear what she thinks she did? I had no idea if she was reliable or not for most of the book and I liked the questions and concerns that were swirling around in my head. The setting was also fantastic, it was so isolated and claustrophobic. Everyone is completely cut off from civilization except for their fellow passengers and crew and at least one of them is at the very least dangerous and sinister, if not a killer. I was unsettled and pretty creeped out, which is exactly how I want to feel when I’m reading a mystery.

Lo was annoying, and I’m not the first, nor will I be the last person to say this. She’s weak minded and paranoid and I just couldn’t sympathize with her as much as I probably should have. She gave off a nervous energy that made me anxious and feeling unsettled. I think it’s mainly due to the fact that I couldn’t trust her or anyone else aboard the Aurora. All signs were pointing to her being delusional and though I had moments where I wanted to believe her wholeheartedly, I just couldn’t fully back her.

Ware has a sharp and clearly defined writing style that held my attention for most of the book. There were a few parts that were a little bit slow, so some patience is required here. I do believe the payout is worth it in the end as the ending was completely unpredictable for me and I didn’t see it coming. Bottom line? A solid mystery with a fantastic setting. I’m a Ruth Ware fan and will be following her closely.