How can you make the right decisions if everything you’ve been told is a lie?

With absent parents and broken friends, twenty-one year old Ben is making choices, which are ruining his life. In jail, again, he and his cellmate, Jake, take a hostage in a futile gesture against a system they can’t control.

This powerful, beautifully written novel gives a vivid and realistic picture of those we send to prison.

Who would you rely on if you were locked up?

Do we ask the most from the ones who have the least?

Life is never easy when you are a boy inside.

I’m delighted to be opening the blog tour for The Boy Inside today and want to wish Ross Greenwood a very happy publication day! 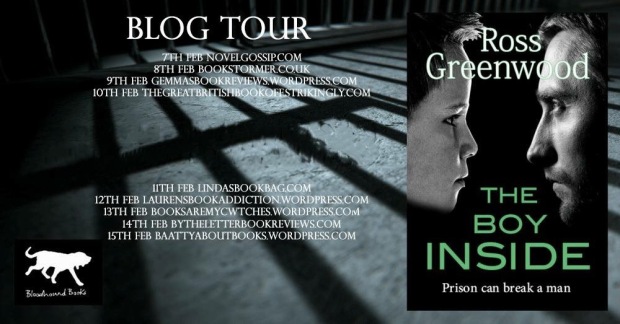 I wasn’t entirely sure what to expect from this book, but whatever I was anticipating, it wasn’t what I received. I don’t mean that in a negative way at all, this was just so highly different from any other crime novel that I have read before. It wasn’t typical in the sense that there was a case to be solved, or a detective to follow, or even a killer narrating, things that fans of this genre have seen before and even come to expect. Instead it was a dark and harrowing look into the life of a teenager who bounces in and out of the prison system and how this effects his fragile life in many ways.

The book starts when Ben is about fifteen and his life is ok, not too bad at all. He’s an only child and his parents are still married, and though they may not be rolling in the dough, he’s taken well care of for the most part. When his dad gets cancer and passes away, his mom turns to alcohol and Ben finds that he mostly has to take care of himself. He meets Jake, another local teenager and before too long he’s dabbling in petty crimes, and actually enjoying himself. He has no idea at the time that this will be his fatal mistake.

The book continues to follow Ben and Jake until Ben is twenty one as he gets locked up and released only to be picked up again as he can’t seem to keep his nose clean. His struggles were awful and heartbreaking and the worst part of all for me at least, was that this is an accurate reality for many young men. Ben didn’t have the necessary resources to stay out of prison even though he never wanted to be there. His mother was battling her own demons against alcohol and he was hanging around the wrong crowd so the odds were never in his favor. This was very gritty and dark, and as much as I was rooting for Ben, it really seemed like he never had a real chance at a normal, prison free life.

If you’re looking for an entirely different type of book that is heavily character driven, you would enjoy this one.

Thanks to Bloodhound Books for my review copy.

Ross was born in 1973 in Peterborough and lived there until he was twenty, attending The King’s School in the city. He then began a rather nomadic existence, living and working all over the country and various parts of the world.

He found himself returning to Peterborough many times over the years, usually when things had gone wrong. It was on one of these occasions that he met hs partner about a hundred metres from his back door whilst walking a dog. Two children swiftly followed. He’s still a little stunned by the pace of it now.

This book was started a long time ago but parenthood and then four years as a prison officer got in the way. Ironically it was the four a.m. feed which gave him the opportunity to finish the book as unable to get back to sleep, he completed it in the early morning hours.

5 thoughts on “Blog Tour: The Boy Inside by Ross Greenwood @greenwoodross @bloodhoundbook”