Happy Saturday everyone! Today I have author S. A. Stovall who is the author of Vice City and several others. Read on for more information about the book and an interview. 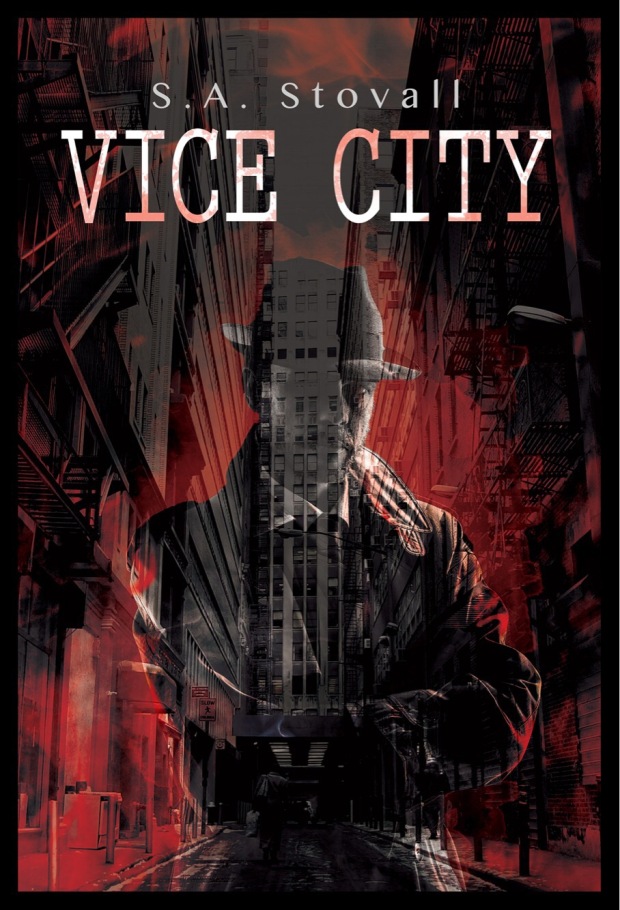 After twenty years as an enforcer for the Vice family mob, Nicholas Pierce shouldn’t bat an eye at seeing a guy get worked over and tossed in the river. But there’s something about the suspected police mole, Miles, that has Pierce second-guessing himself. The kid is just trying to look out for his brother any way he knows how, and the altruistic motive sparks an uncharacteristic act of mercy that involves Pierce taking Miles under his wing.

Miles wants to repay Pierce for saving his life. Pierce shouldn’t see him as anything but a convenient hookup… and he sure as hell shouldn’t get involved in Miles’s doomed quest to get his brother out of a rival street gang. He shouldn’t do a lot of things, but life on the streets isn’t about following the rules. Besides, he’s sick of being abused by the Vice family, especially Mr. Vice and his power-hungry goon of a son, who treats his underlings like playthings.

So Pierce does the absolute last thing he should do if he wants to keep breathing—he leaves the Vice family in the middle of a turf war.

1. What’s a typical writing day for you look like? Describe your perfect writing environment.

​The first thing I do before I write is re-read the last chapter/couple paragraphs from the day before. Or, if I’m starting a new project, I like to go over my outline or make a basic structure for the novel.

​And the perfect writing environment? I wonder if there is such a thing!

​I do my best writing when I’m passionate about the story, no matter where I’m physically located. Sometimes I’ll be doing something else unrelated, like walking through the grocery store, when I get a good idea and feel the urge to write. I’ll bust out my phone, or my laptop, and get to writing, no matter what my family or friends are doing, no matter the time of day. That’s the best environment—drowning in the passion of storytelling.

2. How did you get started writing? Was it something that you’ve always loved?

​But I guess it all started when I got into Dungeons and Dragons. It’s a table-top role playing game where one person (the Dungeon Master) creates a campaign for everyone else to play through. The campaign is the story, and the better the campaign the more fun the players have.

​A lot of friends enjoyed my games, my stories, my characters—and their praise fueled my desire to write a novel. Then a wrote a few and everyone got excited, kept asking me for the sequels, or other novels, so I wrote more and more until eventually I realized it was what I was passionate about.

​I actually wrote my debut novel, VICE CITY, for a friend of mine. She’s one of my biggest fans, so I wrote this crime thriller (with a dash of romance) as a personal story for her. To my surprise, several agents loved it, and eventually a publisher scooped it up, so I’ll always be thankful for my friend’s encouragement. (I even dedicated the novel to her!)

3. Who are your favorite writers/inspirations?

​Stephen King is my biggest inspiration, however. He writes in so many genres, and he writes so many books, that everyone can probably find something of his they like. I want a career akin to his. I want to write in numerous genres and have so many novels that someone, somewhere, will find something they enjoy.

4. Anything you can tell us about upcoming projects?

​I have a WWI fantasy about a girl who joins a special military unit of sorcerers. I also have a speculative fiction/urban fantasy about a world ruled by the undead. And last, but not least, I have a science fiction adventure that deals with manipulating genetics (with an arrogant anti-hero protagonist that makes the whole thing hilarious).

​VICE CITY, my debut novel, already has a sequel slated for April 2018. It’s titled VICE ENFORCER and continues eight months after the first, with the mob enforcer main character getting wrapped up in old business while trying to avoid having his identity discovered by the cops.

5. Normally how do you develop plots/characters? Brief us on your process.

​I usually start with an idea, something simple, and then I imagine the ending. The ending is my favorite part of any good story—the crescendo and climax make or break my enjoyment. If the ending is good, I will usually forgive weird stuff that happened in the middle of the story. If the ending is terrible, I’ll walk away from the story hating it.

​That being said, I think of a good ending first. Then I think of the main character and all the personality traits that would be involved in such a story. Good characters are important to me—they’re what hook me in and plant the seed of desire to see the ending. If the characters are well realized, it’ll take me to end (again, even if the middle is terrible).

​And then I think of the relationship the hero would have with the villain. I love stories where the villain and the hero have history—whether they’re related, or they were once lovers, or if it’s a story of revenge. I want the struggle to be personal at some level, because it adds to the intensity.

​Then I usually start writing and things get changed around from there.

6. Favorite character from one of your own novels?

​My favorite character from my own novels is a young man by the name of Ereziel Tyne. (Fun fact, true fact, you can tell its fantasy character by the ‘z’ and ‘y’ in the name.)

​But seriously—he has a sarcastic and jaded personality, is rarely impressed, but even when he is, he doesn’t like to admit it. Ereziel is intelligent (which is where he gets his arrogance) but not the nicest of individuals. He meets a girl who had a rough life and shares his jaded attitude, and their relationship turns him around—he gets a little nicer and empathizes with new people a little more.

​My second favorite is Nicholas Pierce, the main character of VICE CITY, for similar reasons. Although Pierce isn’t arrogant, he is jaded and sarcastic, and often feels the world is a lot darker than everyone else sees it.

​I just love characters that come to the realization that life can be wonderful, even if some aspects are dark. Pierce and Ereziel definitely have that in common.

​Probably through Twitter (@GameOverStation) or through my website (https://sastovallauthor.com/contact/). Either method will get to me pretty quick.

8. On average, how long does it take you to write a book?

​It depends on the genre. Science fiction and fantasy typically take me several months (3-6). Thriller or contemporary usually take me a month to a few months (1-2).

10. Which one of your characters do you relate to the most?

​I don’t usually write myself into any novels. Don’t get me wrong, a piece of me makes it into a lot of characters (I’m sarcastic, just not jaded) and I use my law degree and history degree to help build people’s backgrounds, but I don’t think that’s the same as relating to a character.

​So, in that regard, I guess I relate to all my characters at some level.

11. If writing wasn’t your career what would you be doing?

​Teaching. I’ve taught as a professor at two universities, I’ve worked as a personal tutor for LSAT exams and history classes, and I’ve tutored children with autism. I like knowledge, I think it helps and furthers humanity, and I want people to feel the passion as well.

12. What’s the best compliment that you’ve received about your work?

​It was about VICE CITY, actually. Let me quote you what she said:

“The characterization is top-notch. Redemption stories can be a hard sell, especially for a character like Pierce who has been in the business for a long time. But his growth is gradual, hard-won, and very believable. One of the things I respect most about your writing is your ability to hit on a single, often small, detail that captures the essence of a character or setting. You are often able to express in a few words what could take others paragraphs of description. It goes to show that when a detail is perfect, you don’t need a lot of them.”

​She actually wrote me way more than this, but the above paragraph is a good snippet of what she said. The praise really motivates me to write more, write better, and to continue honing my craft for potential fans.

S.A. Stovall grew up in California’s central valley with a single mother and little brother. Despite no one in her family having a degree higher than a GED, she put herself through college (earning a BA in History), and then continued on to law school where she obtained her Juris Doctorate.

As a child, Stovall’s favorite novel was Island of the Blue Dolphins by Scott O’Dell. The adventure on a deserted island opened her mind to ideas and realities she had never given thought before—and it was the moment Stovall realized that story telling (specifically fiction) became her passion. Anything that told a story, be it a movie, book, video game or comic, she had to experience. Now, as a professor and author, Stovall wants to add her voice to the myriad of stories in the world, and she hopes you enjoy.

2 thoughts on “Saturday Shoutout: Q & A With author S. A. Stovell @GameOverStation”