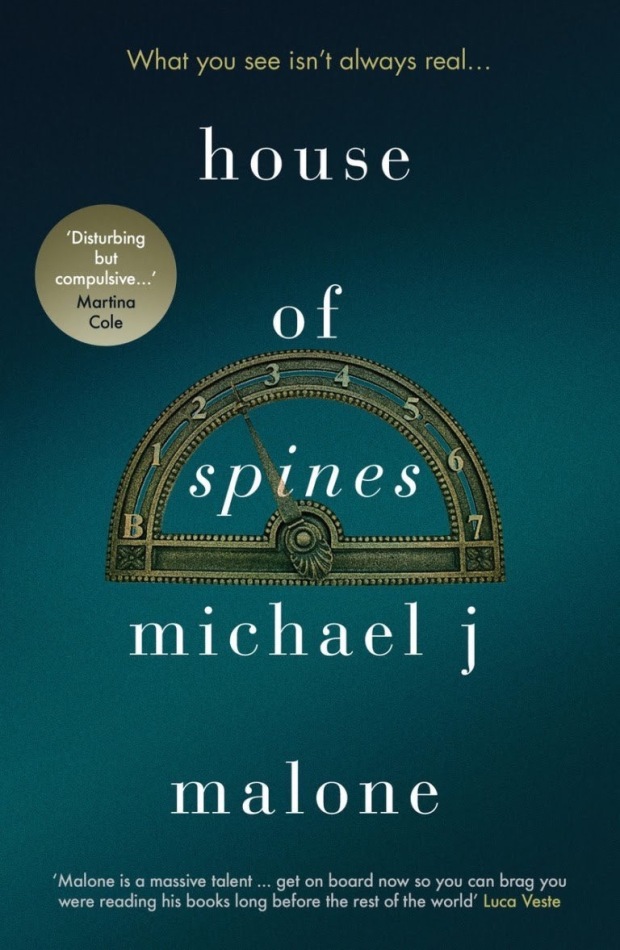 Ran McGhie’s world has been turned upside down. A young, lonely and frustrated writer, and suffering from mental-health problems, he discovers that his long-dead mother was related to one of Glasgow’s oldest merchant families. Not only that, but Ran has inherited Newton Hall, a vast mansion that belonged to his great-uncle, who appears to have been watching from afar as his estranged great-nephew has grown up. Entering his new-found home, he finds that Great-Uncle Fitzpatrick has turned it into a temple to the written word – the perfect place for poet Ran. But everything is not as it seems. As he explores the Hall’s endless corridors, Ran’s grasp on reality appears to be loosening. And then he comes across an ancient lift; and in that lift a mirror. And in the mirror … the reflection of a woman … A terrifying psychological thriller with more than a hint of the Gothic, House of Spines is a love letter to the power of books, and an exploration of how lust and betrayal can be deadly…

I’m so pleased to be hosting a stop on the blog tour for House of Spines today! 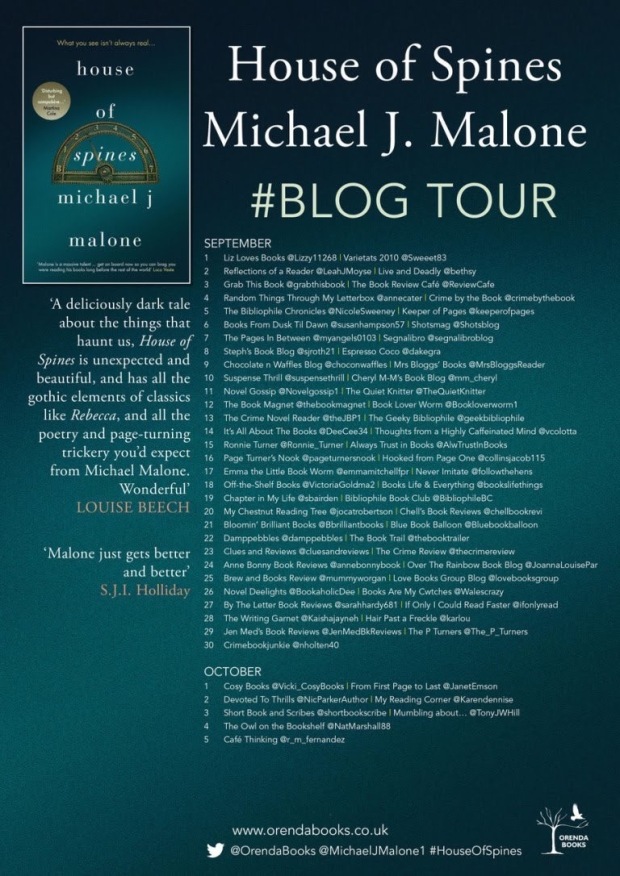 You may remember me raving last year about A Suitable Lie so to say I was thrilled to read House of Spines would be an understatement. While the two books couldn’t be more different in terms of the plot, there was the same sense of being utterly consumed by this book that I had while read ASL. Malone has the uncanny ability to get under your skin and his writing style is so eloquent and fluid, it’s a captivating experience to read his work.

Almost from the moment that Ran enters Newton Hall he is thrown off balance, the house has a profound and powerful affect on him, some good and some not so good, but he is enchanted nevertheless. He was a sympathetic character though his reliability is highly questionable as he suffers from mental illness making me wonder whether the unexplainable things he’s experiencing are real or part of his delusions as a side effect of being bipolar. The lines between fact and fiction are constantly blurred which gave the whole book an unsettling, creepy vibe.

The house itself was an additional character as it seemed to have a distinct personality and moodiness that shifted just like it would in a person. The atmosphere was claustrophobic, tense and chilling most of the time but there were also moments where Ran himself would be in a chipper mood and the house would follow suit.

This was such a bewitching read that was still very much a psychological thriller but with it’s own unique spin, I’ve never read anything quite like House of Spines before. It was dark, twisty and intense with the lyrical prose that I’ve now come to expect from Malone. I highly recommend this one to anyone looking for a fresh, remarkable read! 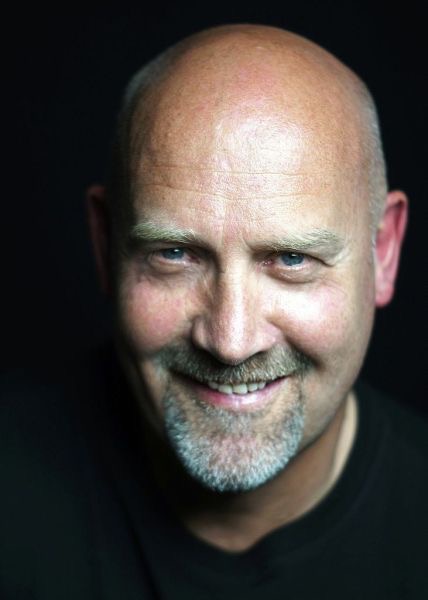 Michael Malone is a prize-winning poet and author who was born and brought up in the heart of Burns’ country, just a stone’s throw from the great man’s cottage in Ayr. Well, a stone thrown by a catapult. He has published over 200 poems in literary magazines throughout the UK, including New Writing Scotland, Poetry Scotland and Markings. His career as a poet has also included a (very) brief stint as the Poet-In- Residence for an adult gift shop. Blood Tears, his bestselling debut novel won the Pitlochry Prize (judge: Alex Gray) from the Scottish Association of Writers. Other published work includes: Carnegie’s Call (a non-fiction work about successful modern-day Scots); A Taste for Malice; The Guillotine Choice; Beyond the Rage and The Bad Samaritan. His psychological thriller, A Suitable Lie, was a number one bestseller. Michael is a regular reviewer for the hugely popular crime fiction website http://www.crimesquad.com. A former Regional Sales Manager (Faber & Faber) he has also worked as an IFA and a bookseller.