She’s a friendly voice on the phone. But can you trust her?

The people who call End of the Line need hope. They need reassurance that life is worth living. But some are unlucky enough to get through to Laura. Laura doesn’t want them to hope. She wants them to die.

Laura hasn’t had it easy: she’s survived sickness and a difficult marriage only to find herself heading for forty, unsettled and angry. She doesn’t love talking to people worse off than she is. She craves it.

But now someone’s on to her–Ryan, whose world falls apart when his pregnant wife ends her life, hand in hand with a stranger. Who was this man, and why did they choose to die together?

The sinister truth is within Ryan’s grasp, but he has no idea of the desperate lengths Laura will go to…

Because the best thing about being a Good Samaritan is that you can get away with murder.

I’m so excited to be one of the stops on the blog tour for The Good Samaritan today!

Oohh what a dark and oftentimes uncomfortable read this one was, but I really do love to be pushed to my limits while reading and I always appreciate reading about a new, fresh subject and The Good Samaritan most definitely provides all of the above. It’s also disturbing, dark and filled with characters that you will alternate between hating and even sympathizing with, but they are all highly complex and incredibly well drawn making for a truly enthralling read.

This is told via dual narratives, that of Laura a volunteer at a suicide hotline and Ryan, the husband of a woman who killed herself and who has his suspicions about Laura. The first half of the book is really laying the groundwork for what’s to come and while I was engaged, I wasn’t as drawn in as I ended up being later on. Then the second half begins and that’s when I was well and truly gripped, by this point I wasn’t putting my Kindle down for any reason as I just had to know how this dangerous game Laura was playing would end.

I don’t want to discuss the plot because this went in several directions that I wasn’t expecting and I don’t want to lead any future readers down a path too early, it’s best if you experience it all on your own. I do want to mention again that parts made me uneasy as reading about someone who actively encouraged others to kill themselves is not easy reading but it didn’t upset me to the point where I had to stop reading or anything, in fact it was quite the opposite and I was totally caught up in the twisty plot and finding out more about the deranged Laura and what motivated her. She simultaneously fascinated me and sickened me, I honestly couldn’t get enough of her! Fans of original stories about manipulation, obsession, lies and delusions will love this one!

Thanks to the author and Tracy Fenton for my review copy. 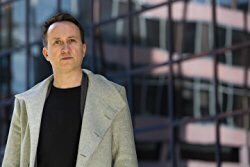 John Marrs is a freelance journalist based in London, England, who has spent the last 20 years interviewing celebrities from the world of television, film and music for national newspapers and magazines.

He has written for publications including The Guardian’s Guide and Guardian Online; OK! Magazine; Total Film; Empire; Q; GT; The Independent; Star; Reveal; Company; Daily Star and News of the World’s Sunday Magazine.
His debut novel The Wronged Sons, was released in 2013 and in May 2015, he released his second book, Welcome To Wherever You Are.
In May 2017 came his third book, The One. It was chosen as the book of the month for BBC Radio 2’s Book Club.
The Wronged Sons was re-edited and re-released in July 2017 under a new title, When You Disappeared.
And his fourth book, The Good Samaritan, is set for release in November 2017.