Blurb:
The gripping new thriller from the bestselling author of Saving Sophie.

When flames rip through their family home, only teenager Stephanie and her younger brother escape unhurt. Brett always liked to play with fire, but now their dad is dead and someone has to pay the price.

Psychologist Connie Summers wants to help Stephanie rebuild her life. She has a new name, a young son and everything to live for. But when Stephanie receives a letter from someone she’d hoped would never find her, Connie is forced to question what really happened that night. But some truths are better left alone . . .

Gripping, tense and impossible to put down, Bad Sister will have fans of Sue Fortin, B.A. Paris and Linda Green hooked until the final page.

I’m thrilled to be the stop on the blog tour for Bad Sister today! 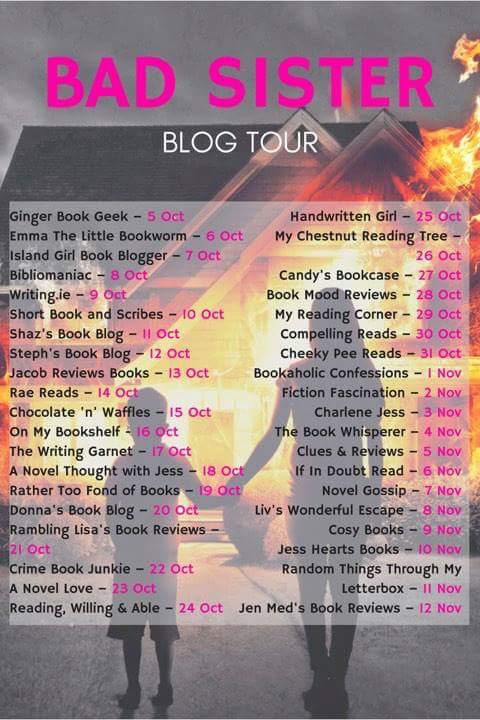 I loved the premise and structure for Bad Sister, alternating timelines always appeal to me and multiple narrators that are done well are fun and Carrington nailed both aspects. This was an extremely fast paced and edge of your seat type of read from an author I’ll definitely be keeping my eye on.

This is told from the perspectives of Connie, DI Wade and an unknown narrator from the past. The blend of these three narratives made this read part police procedural and part psychological thriller with a dash of something sinister as well, I loved the merging of genres and it was executed seamlessly. DI Wade first made her appearance in Carrington’s debut, Saving Sophie and it was fantastic learning a bit more about her this time around. Connie was the type of character that you’re not quite sure about, her history is sketchy and I often wondered exactly how reliable she was which really kept me on my toes.

The pacing was fast and furious and almost every chapter ended on a mini cliffhanger making it downright impossible to put it down. There were twists and turns galore and more shocking moments and surprises than I can count but at no point did I have anything figured out, I always had more questions than answers. When things all came together in the end I was ultimately satisfied, this was a highly entertaining and exciting read!

Sam Carrington lives in Devon with her husband and three children. She worked for the NHS for fifteen years, during which time she qualified as a nurse. Following the completion of a psychology degree she went to work for the prison service as an Offending Behaviour Programme Facilitator. Her experiences within this field inspired her writing. She left the service to spend time with her family and to follow her dream of being a novelist. SAVING SOPHIE, her debut psychological thriller, published in September 2016. It became a Kindle eBook bestseller, with the paperback hitting The Bookseller Heatseeker chart at #8. Sam was named an Amazon Rising Star of 2016. Her next psychological thriller, BAD SISTER, publishes in October 2017 in ebook and December in paperback.