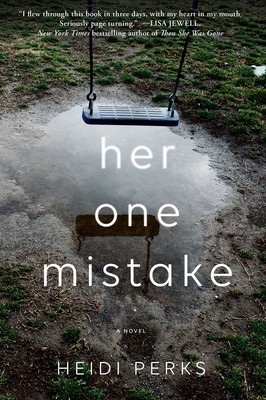 It all started at the school fair…

Charlotte was supposed to be looking after the children, and she swears she was. She only took her eyes off of them for one second. But when her three kids are all safe and sound at the school fair, and Alice, her best friend Harriet’s daughter, is nowhere to be found, Charlotte panics. Frantically searching everywhere, Charlotte knows she must find the courage to tell Harriet that her beloved only child is missing. And admit that she has only herself to blame.

Harriet, devastated by this unthinkable, unbearable loss, can no longer bring herself to speak to Charlotte again, much less trust her. Now more isolated than ever and struggling to keep her marriage afloat, Harriet believes nothing and no one. But as the police bear down on both women trying to piece together the puzzle of what happened to this little girl, dark secrets begin to surface—and Harriet discovers that confiding in Charlotte again may be the only thing that will reunite her with her daughter….

This breathless and fast-paced debut—perfect for fans of Big Little Lies and The Couple Next Door—takes you on a chilling journey that will keep you guessing until the very last page.

What is it about a missing child premise that always intrigues me?! It’s one of my biggest fears as a parent, yet it always grabs my attention and this one more than grabbed my attention, it consumed me, I seriously could not put it down! I read it in two sittings in one afternoon and even my husband interrupted and said, wow you’re really into this one aren’t you Amy?! I just nodded and shushed him because, yes I am haha!

While I love a missing child storyline I’m always so excited when an author puts their own unique spin on the premise and Perks did just that. Imagine being in charge of your best friends daughter and then losing the child, how guilty and absolutely wretched would you feel? That’s the case for Charlotte and I truly felt sorry for her, there’s nothing you can do and surely nothing you can say to make things better in such a situation. Then poor Harriet, not knowing where her little girl is destroys her and I felt just as bad for her as I did for Charlotte. This flips back and forth between both women’s POV and I was really invested in both of their lives.

This is where I stop discussing even the most minor of plot details because things went in SO many unexpected directions that I don’t even want to hint at a possible spoiler. There are secrets galore and jaw dropping twists, I really didn’t see any of them coming, but I also wasn’t playing detective and looking too closely because I was entirely wrapped up in every single page. What a gripping read, it was incredibly well done, intense and complex, highly recommended!!

Her One Mistake in three words: Compulsive, Secretive and Twisty.

19 thoughts on “Review: Her One Mistake by Heidi Perks”