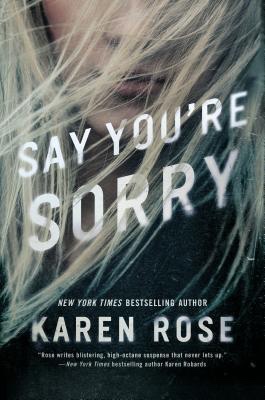 FBI Special Agent Gideon Reynolds did not have a conventional upbringing. Raised in a cult in Northern California, his mother smuggled him out when he was thirteen, and he never saw her again. It is not a bit of history he is keen on sharing, but being guarded has not gotten him any closer to what he really wants: a family.

Daisy Dawson lived a sheltered childhood. Her father, a former military man, believed that the woman he loved and her daughter were being hunted, so he took extreme measures to keep his family safe. But despite his best efforts, Daisy is done being scared. New to Sacramento, she is ready to jump headfirst into life–until she is attacked one night.

Gideon is caught unawares by Daisy, who is unlike any victim he has ever met. But the attacker is far from finished, and tracking him will threaten to pull Gideon back to the world he fought so hard to leave…

I’ll be the first to admit that I don’t read a ton of romantic suspense, which is sorta weird because I like both suspense and romance separately, but not often together. I often find that there’s usually too much romance and not enough tension, I never really find the right balance for my personal taste. And then I was browsing Netgalley and saw the cover/blurb for this and I just couldn’t ignore it and I am thrilled that I gave it a try, it was excellent.

I have to warn you guys that this is a long book, over 600 pages, so this is not a book to binge read at all. It’s one where character development is key and Rose is fantastic at peeling back the layers of the main characters. It’s also the first in a new series where any good author will spend some time diving into their leads, so while understandable, it’s a dense one. I knew this going in and was prepared, so I settled in and savored the read, I want to make sure you also know this before thinking this is a one sitting read or one that you’ll fly through.

While it is long and the characters are incredibly well drawn, it is still incredibly tense and there is plenty of excitement. Daisy is in danger almost from page one and there was a fantastic sense of dread that steadily increased as the story progressed. Between the action there was a relationship burgeoning Daisy and Gideon and their chemistry was HOT, so basically there was always something exciting going on!

If you’re already a fan of romantic suspense then definitely check this out, and if you’re a little wary like me, this is an excellent place to start. Trust me, it’s still very dark with a creepy serial killer on the loose and even he was interesting and well drawn! There’s also a religious cult, which fascinates me, something for everyone here.