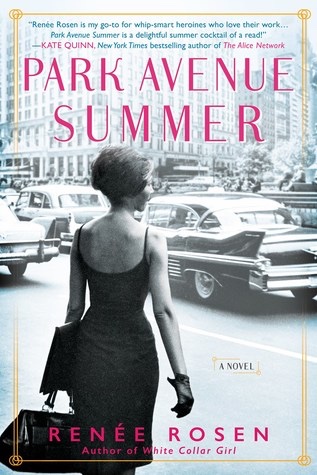 Mad Men meets The Devil Wears Prada as Renée Rosen draws readers into the glamour of 1965 New York City and Cosmopolitan Magazine, where a brazen new Editor-in-Chief–Helen Gurley Brown–shocks America by daring to talk to women about all things off limits…

New York City is filled with opportunities for single girls like Alice Weiss who leaves her small Midwestern town to chase her big city dreams and unexpectedly lands the job of a lifetime working for Helen Gurley Brown, the first female Editor-in-Chief of a then failing Cosmopolitan Magazine.

Nothing could have prepared Alice for the world she enters as editors and writers resign on the spot, refusing to work for the woman who wrote the scandalous bestseller, Sex and the Single Girl. While confidential memos, article ideas, and cover designs keep finding their way into the wrong hands, someone tries to pull Alice into this scheme to sabotage her boss. But Alice remains loyal and becomes all the more determined to help Helen succeed. As pressure mounts at the magazine and Alice struggles to make her way in New York, she quickly learns that in Helen Gurley Brown’s world, a woman can demand to have it all.

I used to be obsessed with Cosmo, I had a subscription for years and one of the best days every month was always when a copy showed up in my mailbox, so when I found out Park Avenue Summer focused on the woman who gave Cosmo a makeover in the sixties I was super excited about this one! NYC in this era is also fascinating for me, so I had a strong feeling that this would be an amazing read for me and it was!

I imagine it would be really tricky and somewhat complicated to blend fact with fiction but Rosen did an incredible job here. This is told solely from Alice’s perspective but you also learn so much about HGB through her eyes which was totally fascinating. Alice was well drawn, at the start she’s new to the city and trying to find her place there and she grows and matures so much throughout the book. HGB is quite a character, she’s endlessly interesting to me and after reading the authors note and seeing that much of what was portrayed was really true, I was even more impressed. Rosen’s attention to detail and obvious research is very apparent and impressive.

This one has it all my friends, rich historical detail, love, loss, family and maybe most importantly, it was inspiring. Both Alice and Helen were bold in their own way and ahead of their time despite the heavy pushback from the men in their lives and I so admired their sheer will and perseverance. Highly recommended by me, it’s a perfect summer read, light and fun but with depth and heart as well!