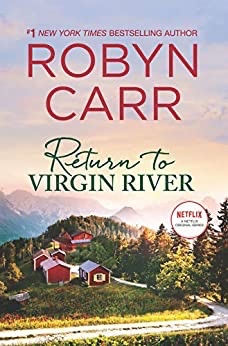 Kaylee Sloan’s home in Southern California is full of wonderful memories of the woman who raised her. But the memories are prolonging her grief over her mother’s recent death. A successful author, Kaylee hoped she could pour herself into her work. Instead she has terrible writer’s block and a looming deadline.

Determined to escape distractions and avoid the holiday season, Kaylee borrows a cabin in Virgin River. She knows the isolation will help her writing, and as she drives north through the mountains and the majestic redwoods, she immediately feels inspired. Until she arrives at a building that has just gone up in flames. Devastated, she heads to Jack’s Bar to plan her next steps. The local watering hole is the heart of the town, and once she crosses the threshold, she’s surprised to be embraced by people who are more than willing to help a friend—or a stranger—in need.

Kaylee’s world is expanding in ways she never dreamed possible. And when she rescues a kitten followed by a dog with a litter of puppies, she finds her heart opening up to the animals who need her. And then there’s the dog trainer who knows exactly how to help her. As the holidays approach, Kaylee’s dread turns to wonder. Because there’s no better place to spend Christmas than Virgin River.

Over the last few years I’ve become a huge fan of RC and have read many of her standalone novels and one of her series (Sullivan’s Crossing) but I had never read the Virgin River series, despite hearing so many wonderful things about it. Late last year I finally decided to dive in both because of the release of the Netflix series and to the challenge I co hosted with Sarah at ReallyIntoThis #fallintomybacklist I adored the first book so much that I’ve spent this year reading the entire series so you can imagine my absolute delight when it was announced that Return to Virgin River was releasing this year! All of that to say, this is now one of my all time favorite series and if you’re a longtime fan you will be very pleased with the latest.

First things first, and one of my biggest burning questions before I started this one was would we be checking in with Jack and Mel? Paige and Preacher? Jilly and Colin? Paul and Vanessa? I’m so happy to say yes, you definitely get some scenes with the old gang, I didn’t totally keep track but I really believe that you at least get a brief mention of most of the characters from previous books. And while that was fantastic, so we’re the two new characters this time around. I immediately clicked with both Kaylee and Landry and could totally see them fitting together perfectly almost immediately. True to the authors style they both have obstacles to overcome before they can truly be together, but they were both so relatable and authentic and their issues were handle with RCs trademark humor and grace. It felt so good to be back in VR, I really can’t say enough wonderful things about this book, this series, hell this author! She’s really one of the best and if you’re a fan of contemporary romance she’s a must!

6 thoughts on “Review: Return to Virgin River by Robyn Carr”