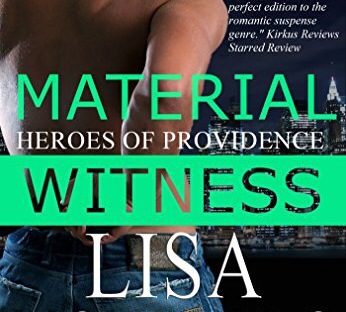 MATERIAL WITNESS, the thrilling, action-packed romantic suspense novel from New York Times Bestselling Author Lisa Mondello, is now on sale for 99 cents only (Regular price: $4.99)! Acclaimed by Kirkus Reviews as the one of the Best Indie Books of 2012, Material Witness will keep you on the edge of your seats from cover to cover.

Hurry, grab your copy today. This offer is available until September 18 only. 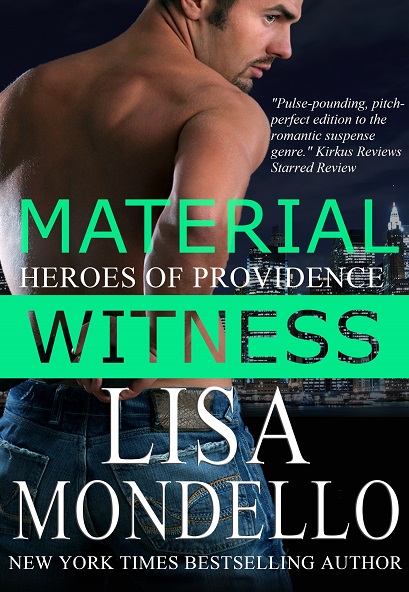 Who does she trust when the horror of one of her crime novels turns into a deadly reality?

Bestselling crime novelist, Cassie Alvarez, aka Cassie Lang, had murder on her mind when she walked into Rory’s Bar under dressed and under cover to research her latest crime novel. Researching the cool, blue-eyed and dashingly handsome man at the end of the bar stirred her senses more than she wanted to admit. But was this man of leather armor all he appeared to be?

Playing White Knight to an innocent wasn’t how Detective Jake Santos planned to spend his time under cover. But there was no way “CJ” was what she claimed to be and that nagging tightness in Jake’s chest told him he’d better take her home to safety and leave it at that. Then the barroom exploded with gunfire, leaving a trail of dead that includes a notorious Providence organized crime boss and an undercover FBI agent. When Cassie’s name is leaked to the media as the only witness to the grisly murders, Cassie insists she only trusts Jake to protect her.

The FBI wants their star witness happy and will do anything to make sure Cassie testifies. But someone wants vigilante justice and it is clear to Jake that the shooter isn’t the only person who wants Cassie dead. Not knowing who to trust, he vows to protect Cassie at all cost despite the fact that guarding the beautiful novelist is a serious distraction.

“Mondello’s latest, a pulse-pounding, pitch-perfect addition to the romantic-suspense genre…the nimble tone that shifts from breezy to thrilling and back again with masterful precision. … Terrific escapist entertainment, as good as anything in Janet Evanovich’s oeuvre.”
– Kirkus Reviews (starred review)

Other Books by Lisa Mondello

Also, don’t miss the next book in the Heroes of Providence series by Lisa Mondello.

New York Times and USA TODAY Bestselling Author, Lisa Mondello, has held many jobs in her life but being a published author is the last job she’ll ever have. She’s not retiring! She blames the creation of the personal computer for her leap into writing novels. Otherwise, she’d still be penning stories with paper and pen. Her book The Knight and Maggie’s Baby is a New York Times Bestseller. Her popular series includes TEXAS HEARTS, DAKOTA HEARTS, Fate with a Helping Hand and the new SUMMER HOUSE series.

Writing as LA Mondello, her romantic suspense, MATERIAL WITNESS, book 1 of her Heroes of Providence series made the USA TODAY Bestsellers List and was named one of Kirkus Reviews Best Books of 2012. You can find more information about Lisa Mondello at http://lisamondello.blogspot.com and sign up for her newsletter to receive new release information at http://eepurl.com/xhxO5.