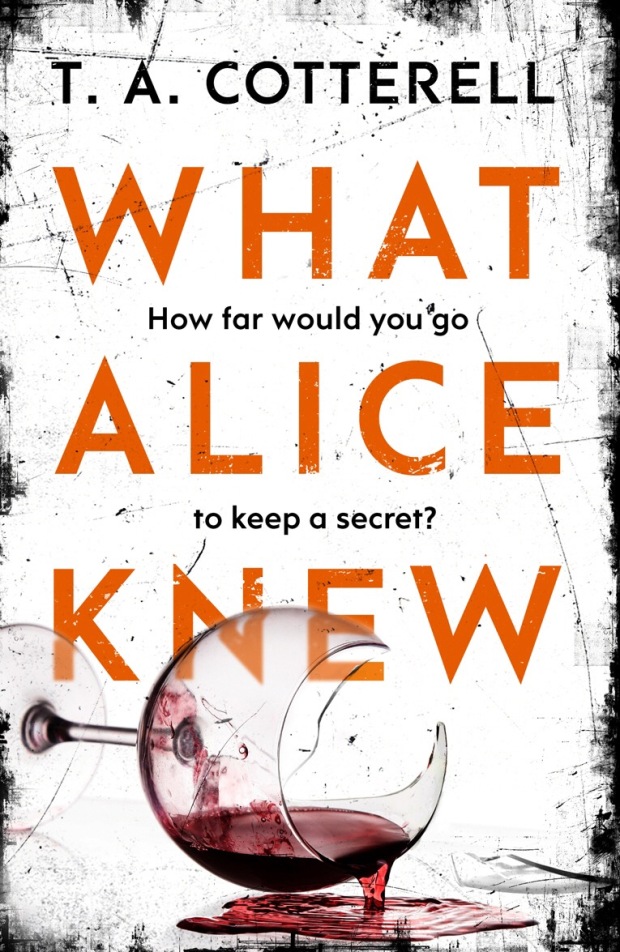 Alice has a perfect life – a great job, happy kids, a wonderful husband. Until he goes missing one night; she receives a suspicious phone call; things don’t quite add up.

Alice needs to know what’s going on. But when she uncovers the truth she faces a brutal choice. And how can she be sure it is the truth?

Sometimes it’s better not to know.

I’m ecstatic to be a stop on the blog tour for What Alice Knew today! Besides my review, don’t miss an extract at the end.

Many of you have probably seen tons of posts about this book all over social media, I know I did before reading it and my interest was piqued the first time as I wondered what, exactly, does Alice know? You have to read it yourself to find out, but suffice it to say, it’s troubling and really makes you think.

Every once and awhile I strongly encourage you to go into a book as blind as possible and that’s what I’m suggesting here. I promise the extract won’t spoil things, it’ll just whet your appetite and leave you wanting more. But, when you finish you’ll most likely need to talk to someone else who has read it, so feel free to come chat with me! (Thanks to Kate from Bibliophile Book Club for letting me badger her!)

I was utterly consumed by this book straightaway, I think a bomb could’ve went off and I wouldn’t have been bothered. Alice is an average woman living a pretty average life until one night her husband is unaccounted for. This is completely out of character for Ed, and as Alice starts to dig deeper into where he actually was, she uncovers things that have the power to change her life forever. The choices Ed made have a huge impact on their lives and this story is about the aftermath of one fateful night.

There are so many underlying themes here, I kept thinking that this would spark so many fantastic discussions for a book club. The power and impact of lying, the lengths one will go to protect their loved ones, honesty and truth, I could go on and on. This isn’t a classic thriller in the sense that you’re wondering who committed a crime but rather you’re wondering how things will play out. Can a massive secret be kept or will lies fester and eat you up inside? There is not the typical mounting tension, but instead there are a number of very tense scenes where you’re sure things are coming to a head only to be proved wrong.

Cotterell has a very unique and fresh type of psychological thriller in What Alice Knew and his prose is infused with gorgeous descriptions of art as Alice is a portrait landscaper. I’m blown away that this is a debut novel as it doesn’t read that way. Besides a totally absorbing plot, you have vibrant and rich descriptions and fascinatingly complex characters. There are plenty of unexpected turns and outcomes throughout, then the ending. It was one of those shocking endings that I needed time to process. In a way it’s ambiguous but it really couldn’t be more fitting.

Thanks to Becky at Transworld for my review copy. 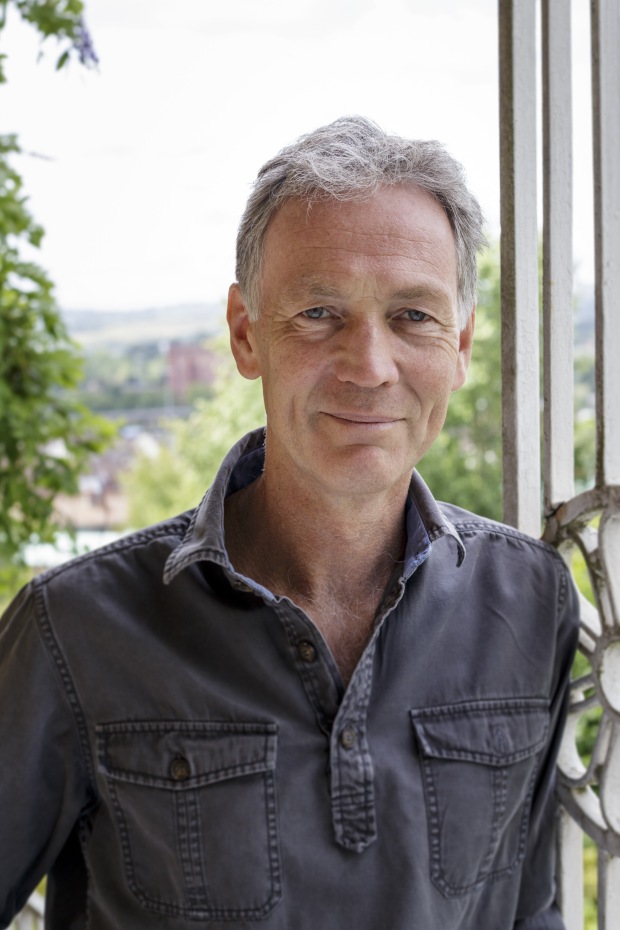 T.A. Cotterell read History of Art at Cambridge University. He worked in the City before resigning to become a freelance writer. He is now a writer and editor at the research house Redburn. He is married with three children and lives in Bristol.

‘Hello?’
‘Mummy?’
Nell. I had expected Ed, startled awake by exhaustion and the still-empty bed, the lamp switched on, wondering where I was, checking I was OK, eager to know what time I would be back.

‘Nell darling, what is it? Why aren’t you in bed?’

It was a child’s voice again, stripped of the teenage ennui of her text.

‘Have you tried his mobile?’
‘Yup. No answer. I left a message.’
‘St Anthony’s?’
‘They said he left about eight and hasn’t been back.’ ‘And there hasn’t been any emergency call-out?’ ‘Not that I know of.’
‘OK, well I know he was going to Peter Spurling’s party. Maybe he stayed on later than he expected?’

‘Maybe. Only . . .’
‘Only what?’
‘Only he rang before he left the hospital and said he was really tired and would be back by nine thirty at the absolute latest and it’s . . .’

‘And he was working all night last night. Though he did come back for literally five minutes to check we were OK around suppertime.’

An all-nighter? We’d agreed he would never do all-nighters when I was away, barring a life-and-death. He was as insistent about it as I was, maybe even more so. It wasn’t fair on the children. They were too young to be left alone all night, even if it was just about legal. I was going to pick up on it but now wasn’t the time. Besides, I should have been there. It wasn’t the first time my work had taken precedence.

Silence. She’d picked up the doubt in my voice. I couldn’t blame her. It would be completely out of character for Ed to stay late at a party or to renege on a promise he’d made to the children.

‘Sorry, yes, of course. Well look, why don’t you go back to bed? You can get into ours, if you want. I’ll head on to the M4 so I’ll be quicker. I should be back in about an hour and a half.’

‘OK . . .’
‘Yes? You sound unsure?’
‘Do you think everything’s OK?’
‘Of course it is.’
‘Because it’s not like Daddy to—’
‘I know. But, darling, don’t you worry. There’ll be some totally ordinary explanation.’
I truly believed it. Ed was the most reliable man I had ever met. I don’t mean reliable in a Health & Safety, two-pens-in-his-breast-pocket way – he was too sharp for that – but in a family-means-everything way that made us all feel secure.

‘Don’t you worry, my darling,’ I put on the ‘there we go’ voice I used when she lost a school hockey match. ‘Everything will be fine. He’ll probably be back before I am.’

Check out all the stops on the tour! 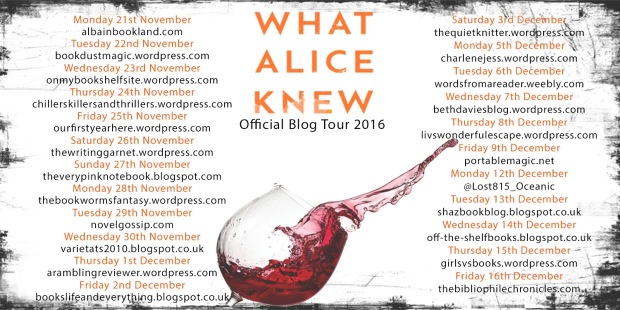 8 thoughts on “Blog Tour: What Alice Knew by @TACotterell1 @Beckyh1712”

My Tweets
Join 9,287 other followers