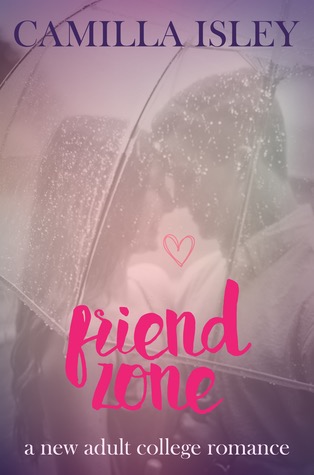 Alice Brown fell in love with Jack the day she moved into her freshman dorm. Problem is, she’s been stuck in the friend zone ever since. After another meaningless breakup, she’s ready to confess her feelings to Jack.

Jack Sullivan has mistaken friendship for love once before and has vowed never to do it again. A varsity sports player, he’s determined to enjoy college with no strings attached.

Peter Wells is Jack’s best wingman. He enjoys his popularity as team captain and when he meets Alice, he’s ready to steal her heart.

When Jack sees Alice and Peter together, jealousy hits him hard. But will he break his vow to never date a friend?

I loved the first Camilla Isley book I read, Love Connection so when I saw she was releasing a new book that was slightly different I was intrigued. LC focused on adult relationships whereas Friend Zone was about a group of college aged young men and women trying to navigate dating as well as friendships and school. I don’t read a ton of NA books but I have to say that I really liked this one!

There are several narrators here, but the chapters are clearly labeled and it didn’t take me long to work out who was dating who and who lived with who. The two main protagonists are Alice and Jack. Alice has been in love with Jack since they met, but Jack is a player and he pushed Alice firmly into the friend zone straightaway. When Alice decides to try and forget about her feelings for Jack she starts dating his close friend and teammate, Peter. Of course Jack being a typical, clueless guy gets jealous and starts wondering if he should’ve dated Alice when had a chance.

All of the characters here are attending Harvard and there’s a good mix of personalities and backgrounds. You have Alice and Jack who are both majoring in chemistry, Madison and Haley are Alice’s roommates and do computer coding and literature, respectively. Jack’s friends are mainly athletes, then there are a few chapters from Alice’s ex boyfriend Ethan and his new girlfriend Rose. It sounds like too much, but I promise it wasn’t confusing especially as they all interact with each frequently making it easy to establish their connections. I think that’s actually what set this apart from a typical story where friends turn to lovers for me. There were many side stories and relationships to follow and it kept me engaged.

This was a really lighthearted and fun read, I’m all for some drama and they way they were hooking up and breaking up constantly made for some juicy scenes. Alice and Jack exchanged cute and playful banter that made me go awww, out loud a few times and I couldn’t help but root for them to figure it out and date each other already! Overall it was a cute and entertaining book that I read in a few hours.