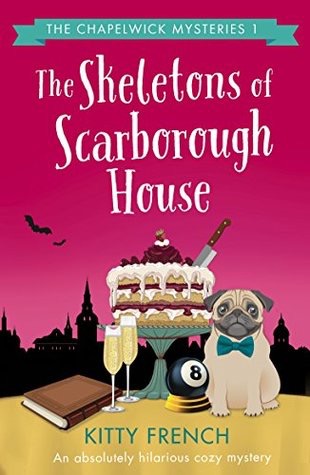 She’s single, addicted to sugar and super heroes, her family are officially bonkers, and she sees dead people. Is it any wonder no-one’s swiping right on Tinder?

Waking up lonely on her twenty seventh birthday, Melody finally snaps. She can’t carry on basing all of her life decisions on the advice of her magic 8 ball; things have got to change.

Fast forward two months, and she’s now the proud proprietor of her very own ghostbusting agency – kind of like in the movies but without the dodgy white jumpsuits. She’s also flirting with her ex Leo Dark, fraternising with her enemy in alleyways, and she’s somehow ended up with a pug called Lestat.

Life just went from dull to dynamite and it’s showing no sign of slowing up anytime soon. Melody’s been hired to clear Scarborough House of its incumbent ghosts, there’s the small matter of a murder to solve, and then there’s the two very handsome, totally inappropriate men hoping to distract her from the job…

Welcome to Chapelwick, home of the brand new and hilarious Girls Ghostbusting Agency series, where things really do go bump in the night.

I was recently chatting with the lovely Kim from Bookouture and she mentioned that the second book in the Chapelwick Mystery series was coming out this month and was shocked when I told her I hadn’t even read the first one! After hearing her endorsement (she named it as her top read of last year) I knew I HAD to hurry and catch up before the second book came out, and man am I glad I listened! This book was fabulous, it had a little bit of everything for everyone. There’s a mystery, humor, heart, warmth, love, and humor. Did I say humor twice? It was that funny, I even tweeted this right after I started.

Melody is one of those characters that’s immediately likable, I don’t think I’ve taken to a heroine so quickly since Becky Bloomwood and Bridget Jones. She’s a 27 year old woman with a penchant for sugar and converse. Totally a woman after my own heart, and if that isn’t enough she can see dead people. Yes, just like The Sixth Sense, except less creepy and more spooktacular fun. Her family consists of her mom and grandma, Silvana and Dicey and they have the family gift, or curse as it sometimes is. These two meddlesome woman were a laugh and a half, the first scene they both appear in is memorable to say the least. I’m chuckling just thinking about it. Besides her family there’s her lifelong best friend Marina, a snarky, sexy Italian badass who starts the Girls Ghostbusting Agency with Melody. They hire Artie and bless him, he’s a doll. He’s an awkward guy, a loner who has never really belonged but he fits in great with the gal pals and begins to come out of his shell. Lastly, there’s Leo, Melody’s ex boyfriend who also has a gift and local reporter Fletch who thinks her and her family are a sham and scoffs at anything even hinting at the supernatural. I can’t forget to mention Lestat the fat, lazy pug Melody winds up with, he’s a riot and Babs the van they drive for work purposes. Yes, the van is a character on it’s own, think the Mystery Machine. This whole cast of characters are wildly entertaining and totally unforgettable.

This is has a historical cozy mystery vibe as the agencies first job is to clear the ghosts from Scarborough House. Melody finds three brothers who died in the early 1900’s until the 70’s and to say their relationships are complicated is an understatement. It sounds goofy, and it totally is but that’s part of the charm. I’m not usually a big fan of paranormal stuff in books but I swear French pulls it off perfectly and puts a refreshing twist on typical chick lit.

If I had to describe this book in one word it would be hilarious, it was so funny and had so much sass. Melody is so quirky and adorable and is the perfect character to lead such a whimsical new series. It’s a total escape from reality and immersing myself in Melody’s wacky world was the most fun I’ve had in awhile.