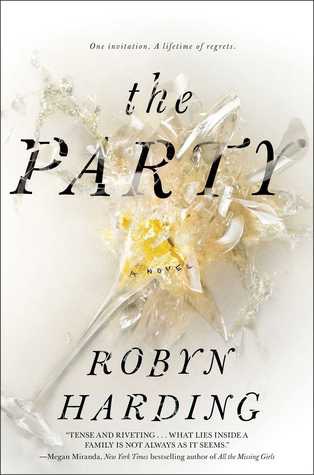 In this stunning and provocative domestic drama about a sweet sixteen birthday party that goes horribly awry, a wealthy family in San Francisco finds themselves entangled in a legal battle, their darkest secrets revealed, and their friends turned to enemies.

One invitation. A lifetime of regrets.

Sweet sixteen. It’s an exciting coming of age, a milestone, and a rite of passage. Jeff and Kim Sanders plan on throwing a party for their daughter, Hannah—a sweet girl with good grades and nice friends. Rather than an extravagant, indulgent affair, they invite four girls over for pizza, cake, movies, and a sleepover. What could possibly go wrong?

But things do go wrong, horrifically so. After a tragic accident occurs, Jeff and Kim’s picture perfect life in a wealthy San Francisco suburb suddenly begins to unravel. A lawsuit is filed that irrevocably changes their relationship, reveals dark secrets in the Sanders’ marriage, and exposes the truth about their perfect daughter, Hannah.

Harkening to Herman Koch’s The Dinner, Christos Tsiolkas’s The Slap, and Liane Moriarty’s Big Little Lies, The Party takes us behind the façade of the perfect family, exposing the lies, betrayals, and moral lapses that neighbors don’t see—and the secrets that children and parents keep from themselves and each other.

The Party was a much lighter mystery than I was expecting, I would even hesitate to label it a thriller as it’s lacking a true mystery or intensity that I believe would qualify it as such. It actually reminded me of Truly Madly Guilty in the sense that it was about a shocking event that has huge ramifications for a group of people. You do find out what happens pretty early on, so there wasn’t the annoying wait for the big reveal. I appreciated this as waiting for information that ends up being lackluster is a huge pet peeve of mine.

This is told from the perspectives of four people; Kim and Jeff who are the parents that threw the infamous party, their daughter Hannah and Lisa the mother of one of Hannah’s friends that attended the party. I’m a fan of this structure and it worked well enough here, but every single one of the characters was very unlikable. Sometimes selfish, insipid characters don’t bother me, but this time it didn’t work out so well for me. I had a hard time feeling sympathetic towards any of them which in turn meant I struggled to form a connection with any of them and left me not really caring what happened to them one way or another.

I do want to be clear and say that with the right reader,  I think this could be an enjoyable read, unfortunately I just don’t think I was the target audience. I expected more tension and instead it was mostly law suits and high school politics. The ending really missed the mark for me but I don’t want to get into it to much for fear of spoilers, I’ll just say that I had hoped maybe some of the characters would have had more growth and maturity by the end. If you’re looking for a mindless summer read and don’t mind a lack of mystery in a book classified as such, The Party may be for you.

25 thoughts on “Review: The Party by Robyn Harding”