Suzanne’s life changes forever the day she receives a visit from Rose Anderson, the woman who has been living with her estranged father, Don.

Don is dead, but Rose wants Suzanne to have his possessions – including a series of intimate diaries and a mysterious collection of photographs of women.

To Suzanne’s shock, one of the photos is of her friend Sophie, who died ten years ago in an unexplained and devastating fire.

But Don only met Sophie once, on an unsettling visit he paid Suzanne just days before Sophie’s death… So why did he have a picture of her?

Unable to let Sophie’s memory alone, Suzanne begins to dig into her father’s life. What horrors is she about to unearth in his journals? And who is it that’s out there, watching her every move?

It is with a heavy heart that I welcome you to my stop on the blog tour for The Serial Killer’s Daughter today as the author sadly passed away last April. Bookouture are publishing this book on behalf of her family and my heart goes out to them. 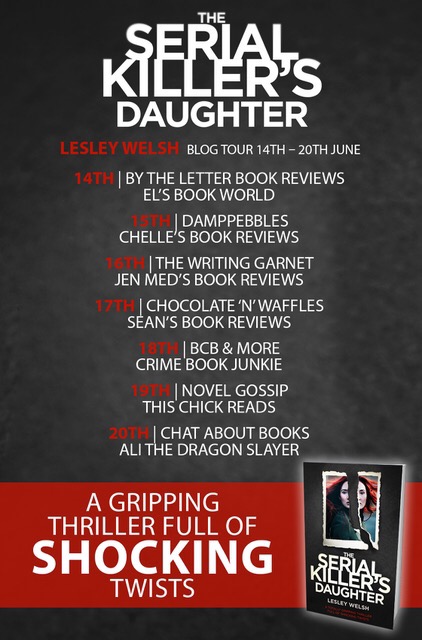 The title alone made this a must read for me, if you’ve been following me for more than a week it’s no secret that I have a sick fascination with serial killer novels. Then the blurb drew me in even deeper as I was intrigued by the idea of dead serial killer leaving a journal full of horrors behind. This book is definitely not as straightforward as I was expecting it to be and the author had some wicked twists up her sleeve that shook me up.

Welsh did such a fantastic job crafting such a horrendous character in Don, he is the personification of evil incarnate and a master manipulator. He’s vulgar, crass and disgusting yet he can turn on the charm when it suits him and that is what makes my blood run cold. Alternatively, Suzanne was someone I could sympathize with and I can’t imagine walking a day in her shoes.

This had a steady pacing with moments where you read about the backstory surrounding Don’s life, but also the women he came into contact with as well as Suzanne, and then faster paced, intense scenes that got my heart racing. The characterization was great and I’m always extremely interested in a killers motivations and life before they turned into a sadistic monster. Some of the past is revealed through excerpts from Don’s journal and they made my skin crawl they were so chilling. Since the plot wasn’t entirely what I had expected I’ll stop here and just say that it’s a great read for fans of this genre and had an explosive climax that was ultimately satisfying and terrifying.

Lesley Welsh sadly passed away in April this year. Lesley was born in Strawberry Field children’s home and raised on a notorious council estate in Liverpool. Later she moved to London where she studied English and Drama and worked as a freelance writer specialising in alternative lifestyles. Her articles appeared in Cosmopolitan, Marie Claire, Red, Bite, Time Out and many others before she established Moondance Media, a magazine publishing company. Her dark and compelling short story Mrs Webster’s Obsession was turned into a film. Lesley moved to Spain and sadly passed away in April.