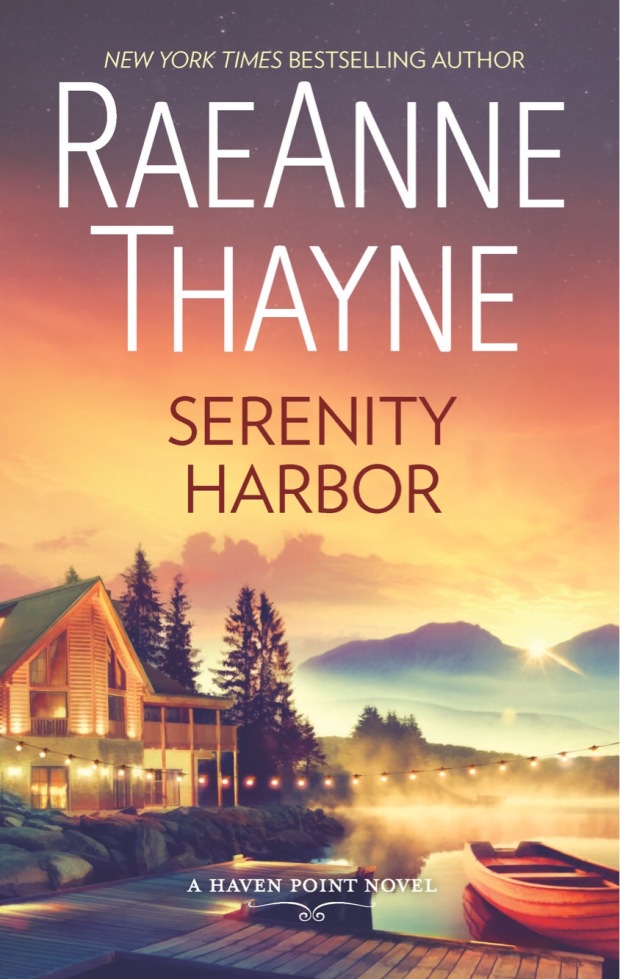 Computer-tech millionaire Bowie Callahan is about the last person that schoolteacher Katrina Bailey wants to work for. As far as she can see, he’s arrogant, entitled and not up to the task of caring for his young half brother, Milo. But Kat is, especially if it brings her closer to her goal of adopting an orphaned little girl. And as her kindness and patience work wonders with Milo, she realizes there’s more to sexy, wary Bo than she’d ever realized.

Bo never imagined he’d be tasked with caring for a sibling he didn’t know existed. Then again, he never pictured himself impulsively kissing vibrant, compassionate Katrina in the moonlight. Now he’s ready to make her dream of family come true…and hoping there’s room in it for him, too…

Serenity Harbor is the sixth book in Thayne’s Haven Point series and this was my first experience with the author. I had no issues jumping in at this point as it looks like each book focuses on different residents of the same town, so while this one was about Katrina and Bowie, characters from the previous books made an appearance. I really like when authors build a series this way and I wish I had the time to go back and read from the beginning! Instead, I’ll just be happy that I found these books now and will continue to follow from here on out.

This book had everything I’m in the mood for when I pick up a romance novel. It was super sweet without being over the top and cheesy, it had a great setting with a picturesque little town and characters that stole my heart. I like Kat and Bo well enough but the star of the show for me was Bo’s little brother, Milo. He’s a six year old little guy with autism who had a rough start to his short life. Anytime I watch a show or read a book with a character on the spectrum, I’m instantly interested. My son has autism so I’m obviously always on the lookout for characters with it as well and I’m always nervous about how they’re portrayed. I shouldn’t have worried as Thayne did a beautiful job and her portrayal was real, honest and highly accurate. She either has personal experience with autism or she did some fabulous research, either way bravo!

Another thing that I really liked was that this was a clean romance, meaning no graphic love scenes. I’m not a prude, but oftentimes I find myself skimming over sex scenes, so the lack of them worked for me here. That doesn’t mean that there was a lack of chemistry between the two leads, there definitely was, it just focused more on them building a relationship based on more than physical intimacy. I love that, it’s a book I would be comfortable recommending to a teenager. I think this would appeal to fans of Nora Roberts or Kristan Higgins as the writing style was similar, or to anyone looking for a feel good read with heart.

Thanks to Claire at Little Bird Publicity for my review copy.