‘The first one had been an accident. He had never intended to kill her. But as he looked down at her body, he knew there would be a next one…’

When the body of Lola Evans is found in a local park on a cold winter’s morning, Detective Alex King and her new recruit Chloe Lane are called in to lead the hunt for the killer.

Days later, a second girl goes missing. It seems the two shared a troubled history, and were members of the same support group. Who is the monster preying on these vulnerable girls?

As the detectives start to piece together the clues, Chloe realises that she too is in danger – as she uncovers secrets about her own brother’s death which someone will kill to keep hidden.

Welcome to my stop on the blog tour for The Girls in the Water! 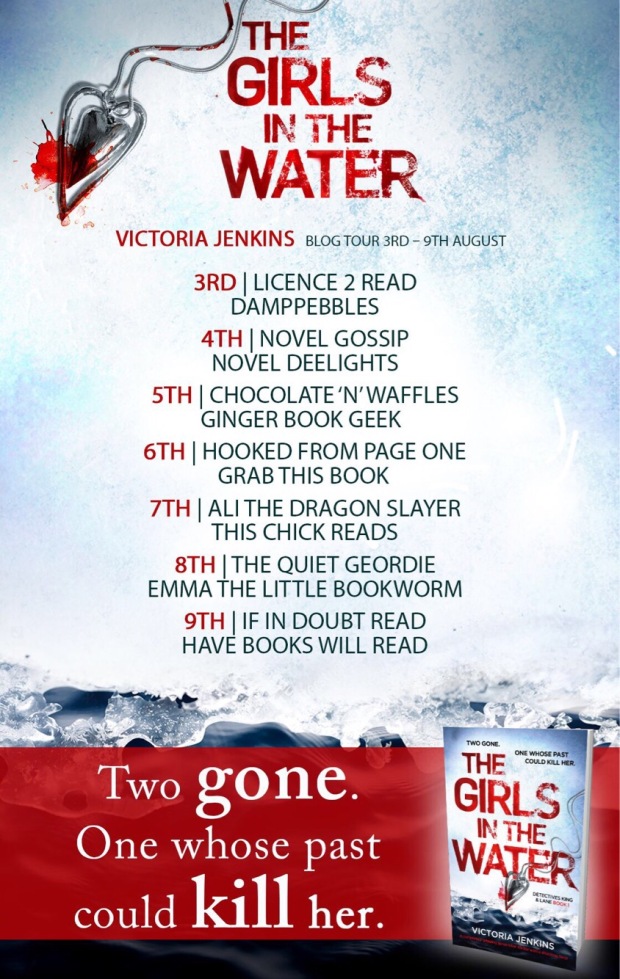 I’m always super excited when I’m able to jump in on the ground floor of a new series, it’s intimidating when you really want to read a book and you realize it’s the eighth book already, right?! The Girls in the Water is an excellent beginning to an exciting new series, if you want to catch it from the beginning it’s out now!

Alex and Chloe are the two lead characters, they are partners and Alex is Chloe’s boss. Alex is in her forties and Chloe is in her twenties but despite their age difference, they make quite the team. The case they’re working on is really intense, young women are being murdered and left in bodies of water. When a tie to Chloe’s past is uncovered the tension mounts as they realize she may be in danger as well.

The character development was strong here, both Alex and Chloe have interesting pasts. Alex has a complex relationship with her ex husband, Rob and Chloe’s brother died when she was younger. The dynamics of the team were also engaging, I quite liked all of them besides Alex and Chloe including Dan and their superintendent Harry.

The pacing is steady to start, I think this is partly because Jenkins is introducing the reader to a new cast of characters. Things do amp up as the book progresses and the climax was intense and got my pulse pounding. There were also quite a few surprising turns that caught me off guard, being shocked is always good! I’m looking forward to the next book already and think fans of Patricia Gibney would enjoy this one.

Victoria Jenkins lives with her husband in South Wales, where she writes crime fiction and teaches English. The Girls in the Water is her debut novel, the first featuring Detective Inspector Alex King and Detective Constable Chloe Lane. The

4 thoughts on “Blog Tour: The Girls in the Water by Victoria Jenkins @vicwritescrime @bookouture”