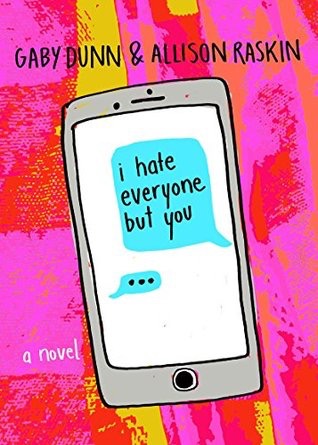 I can already tell that I will hate everyone but you.

(that brunette who won’t leave you alone)

We’re still in the same room, you weirdo.

So begins a series of texts and emails sent between two best friends, Ava and Gen, as they head off to their first semesters of college on opposite sides of the country. From first loves to weird roommates, heartbreak, self-discovery, coming out and mental health, the two best friends will document every moment to each other. But as each changes and grows into her new life, will their friendship be able to survive the distance?

I love epistolary novels, there’s something really addictive about them, I think it’s because I feel like I’m getting an up close and personal look into someone’s life because letters/emails/texts are so personal. The format of this worked well for me, it’s all emails and texts between two eighteen year old best friends who are starting their freshman year of college at different schools. These two are polar opposites each dealing with their own issues and I found it to be a really timely read that I think will be a hit for the younger YA crowd.

This was a highly diverse read as Gen is trying to figure out her sexuality and Ava has mental health issues, it really hit on several hot button topics that are hugely relevant today. Ava is sort of naive and uninformed and she struggles to understand Gen’s sexual preferences and behaviors. Gen is mostly patient with her but there were a few times where I felt like she was too harsh with Ava. These two had the type of friendship with no boundaries and when Ava would ask a question (albeit one that’s not politically correct) Gen would bite her head off, she was flat out mean to her.  I get Gen’s frustration but I think Ava felt like it was a safe place for her and she genuinely wanted to become informed and in no way meant to offend her friend. It was just a bit over the top for me.

This was a cute, funny,  fast paced read and the dialogue was hip and current. Ava and Gen have a fantastic banter and their exchanges really read like that of best friends. I didn’t really like either of them but that didn’t stop me from reading it, but then again these two were born the same year I graduated high school, so as far as being able to relate to them on a personal level… 😂👵🏻

4 thoughts on “Review: I Hate Everyone But You by Gaby Dunn and Allison Raskin”