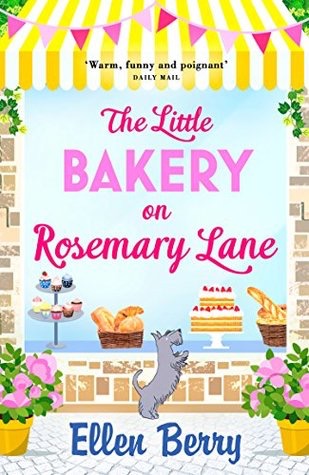 **Take a trip to the Yorkshire village of Burley Bridge, where a new arrival is going to shake things up…**
Growing up in a quiet Yorkshire village, Roxanne couldn’t wait to escape and find her place in the world in London. As a high-powered fashion editor she lives a glamorous life of perennial singlehood – or so it seems to her sister Della. But when Roxanne gets her heart broken by a fashion photographer, she runs away, back to Della’s welcoming home above her bookshop in Burley Bridge.

But Burley Bridge, Roxanne discovers, is even quieter than she remembered. There’s nothing to do, so Roxanne agrees to walk Della’s dog Stanley. It’s on these walks that Roxanne makes a startling discovery: the people who live in Burley Bridge are, well, just people – different from the fashion set she’s used to, but kind and even interesting. Michael, a widower trying to make a go of a small bakery, particularly so. Little by little, cupcake by cupcake, Roxanne and Michael fall into a comforting friendship.

Could there be a life for Roxanne after all, in the place she’s spent 46 years trying to escape?

Welcome to my stop on the blog tour for The Little Bakery on Rosemary Lane! I have an excerpt to share today. 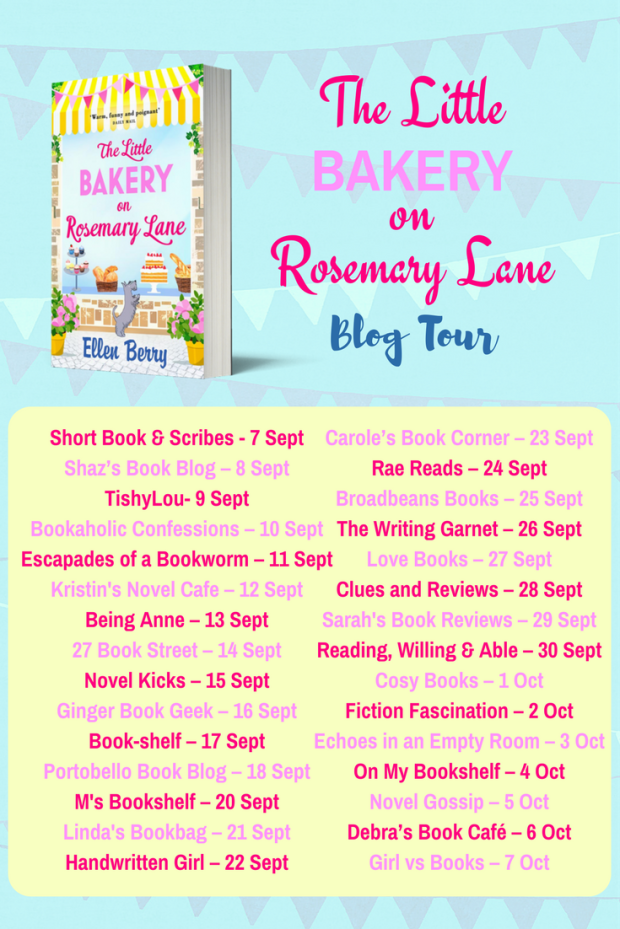 She peered at him squiffily, wondering if there had been a trace of sarcasm in his voice. No, she was just being paranoid, and no wonder – it had been a terrible day, so of course she’d drunk too much and was feeling sensitive. But what the hell? She was tottering off now and dancing, still on her own, feeling happy and light and not caring that Sean had just thrown her a concerned look, and was shaking his head and muttering into someone’s ear, or that she was one of the oldest women in the room.

Sean waggled his hand to beckon her over but Roxanne just laughed and turned away. How boring he was, never venturing onto the dance floor. Age didn’t matter one bit! Britt was beside her now; skinny, sexy Britt, who Sean reckoned to be around forty, although no one was sure and she refused to divulge her age.

Roxanne glanced back at Sean and cried, ‘C’mon, it’s your party! Come and dance!’ He just gave her an inscrutable look and disappeared back into the crowd.

Now more people had joined Roxanne and Britt on the dance floor: Johnny, Serena, Kate, Louie and a couple of new girls from Roxanne’s preferred model agency. They were all dancing and whooping, hair flying, and nothing mattered to Roxanne anymore. Not until she glimpsed a new arrival who was looking around expectantly. Marsha! What was she doing there? Sean didn’t even know her. Roxanne stopped dancing and stared, realising now that Marsha hadn’t come alone, and that Tina Court was hovering at her side. Tina, who’d been hired as the new fashion-director-in-chief! Roxanne had seen her at enough events to recognise her, even in dim light. She was a tiny woman, bird-like with pointy features and brows plucked to the point of near-invisibility. Her long, straight black hair hung in a glossy sheet, and her wincingly tight outfit comprised a shimmery cobalt blue dress with a silver belt and towering nude heels. Marsha was still wearing the same cream shirt and dark skirt she had had on all day. Now the two women were laughing together as if enjoying a particularly hilarious joke.

Roxanne glanced around wildly for Sean, seized by an urge to demand to know why they were here. Okay, so Britt had probably pulled together the guest list, but Sean must have been involved at some point. He’d have been happy to delegate responsibility for the bar staff, the DJ and drinks – but not who was coming. Maybe Britt had insisted Sean invited Marsha, with her being an editor of a glossy magazine now? Roxanne supposed that made sense. But why Tina – the one Roxanne was apparently being so brave and stoical about? Her blood seemed to pulse at her temples as she watched them accept drinks from a waiter and gaze around as if they were utterly entitled to be there.

‘Okay, Rox?’ That was Serena, gently touching her arm.

Roxanne flinched. ‘Yes, I’m fine . . .’ She tried to carry on dancing, realising how terribly drunk she was now, and aware of several glances in her direction. She needed water or more of that puffed rice. It was too hot in here, that was the trouble; lately, her internal thermostat seemed to have gone haywire. She tottered away and stepped outside, onto the red metal fire escape where she inhaled the evening air. From here, she took in the view of London; it was unusually warm, even for late May, verging on stuffy. Perhaps a storm was brewing.