This is my stop during the book blitz for Always With You by Hannah Ellis. This book blitz is organized by Lola’s Blog Tours. The book blitz runs from 3 till 9 October. See the tour schedule here.

Always With You is only $0.99 on Amazon for a limited time!

Blurb:
A secret kept for more than twenty years. A daughter intent on finding the truth…

In 1994, twenty-one-year-old Evelyn Taylor left England to backpack around Australia. When she stopped off in the dusty outback town of Kununurra, she never expected to fall in love with the place – and the people. But Joe Sullivan captured her heart, and when her fun-filled year in Australia came to an end, saying goodbye to him was the hardest thing she’d ever done.

In 2017, Evelyn’s daughter, Libby, embarks on her own Australian adventure. Grief-stricken following her mother’s death, she’s determined to find the father she never met.

Little does she know that digging up the past will be more complicated than she ever imagined.

You can find Always With You on Goodreads

“I’m going to come straight out and ask,” Heidi said, pausing from filing her nails. “Do you want a hug? We could just sit here and cry for the morning if you want? I’d deal with anyone who tried to interrupt.”

I chuckled lightly as I started the process of extracting my outer layer of clothing and readying myself for a morning of making beds and cleaning up after a bunch of strangers. “No, thanks!”

“We can find a minibar to raid if you want?”

“A regular-sized bar then, if you insist!”

“Did Mel message you?” I asked, pulling on the ugly grey tabard and switching my shoes for a pair of well-worn Crocs.

“Only like a thousand times,” Heidi said, swivelling to sit upright on the couch. “She told me to look out for you today. As if I don’t look out for you every day! She’s actually driving me a bit crazy. You know she had the cheek to invite me over for dinner tonight?”

“But why does she think I need an invitation? Is she trying to make a point about all the times I come around without being invited? Like every Friday night for the past ten years! I’m family. Why do I suddenly need an invite?”

“Well, you’re not actually family,” I reminded her.

“Just two small flaws to that equation,” I said flatly. “I’m not related to them or you!”

“I’m your best friend!” she said, outraged. “We’re bound by the knowledge of each other’s deepest secrets and most embarrassing moments. It’s more of a tie than blood, that is. And of course Mel and Rob are your family. You say the weirdest things sometimes. I don’t know why you insist on identifying as a poor little orphan girl.”

“I don’t!” I spluttered. Heidi stared at me, her eyebrows at odd angles. “I’m not even an orphan,” I mumbled. “I have a father somewhere.”

Heidi settled herself back into the couch. “Let’s talk about him.”

“Let’s not.” Sometimes I wished I’d never mentioned my father to Heidi. The snippets of information I’d found out about him before Mum died had played on my mind for a while, and I’d confided in Heidi at the time. I still knew little more than his name. Heidi had been more excited by the revelation than me. She’d spent time searching for him on the internet but hadn’t found out much, other than that he still lived in Australia – where my mum had met him. Heidi had wanted to get on the first plane and go track him down. The more Heidi encouraged me, the more I laughed it off as a crazy idea. After all, I’d managed perfectly well without a father for twenty-one years; why did I need one now?

Because you don’t have a mother any more, the annoying voice inside my head reminded me.

“Are you seriously going to sleep there?” Andrew asked.

“My bed is taken!” I flopped ungracefully into the hammock and wriggled to get my balance right. “And this is really comfy.”

“I’ll be okay. Everyone’s so friendly.”

“I was thinking more about the wildlife.” He glanced around, nervously. “There’s about ten thousand species of things that can kill you around here.”

“I’m sure I’ll survive. You don’t need to babysit me!”

“Not sure I can really sleep in my bed either with all that racket going on.”

“You’ll have to find your own hammock then,” I said. “I’m not shari—” The screech that cut me off was loud, wild and far too close. Jumping out of the hammock, I was behind Andrew in a shot and clinging to his arm. “What on earth?” I said, looking up at the source of the noise.

“Bats,” Andrew said. “One of the few things around here which won’t kill you!”

Rustling overhead drew my attention and the screech came again. Two huge black creatures flapped their massive wings, fighting and shrieking before taking off, causing a breeze as they left.

“What are you doing?” I asked when he manoeuvred himself easily into the hammock.

Light from the nearby path bounced off his eyes, glimmering as he grinned mischievously. “You got out.”

I glared for a moment. Then I walked purposefully over to the hammock and took hold of it with both hands, giving it a quick, forceful tug. Andrew flailed before tumbling out. Smugly, I reclaimed the hammock.

“You got out!” I said innocently when he brushed himself off and stood looking down at me. The hammock wobbled when he climbed in next to me, and I turned my nose up at having his feet beside my head. “You better not snore,” I said.

“You actually think you can sleep in this?”

“Well, it’s pretty wobbly for one thing.” He rocked the hammock to make his point. “And did I mention the wildlife?”

“I’m not the one who jumped a mile at a little bat.”

I gave him a quick kick before I closed my eyes. “Goodnight.”

I was happy to see Cam and his family turn up only a few minutes later. They had spent their Christmas Day on the river. Three boats pulled up to the riverbank and the rowdy occupants announced their arrival with whoops and cheers and a few of them singing “We Wish you a Merry Christmas” at the top of their lungs.

“How’s my favourite British chick?” Cam asked, giving me a hug. “Having a good Christmas?”

“Yeah,” I said, my thoughts still lingering on Joe and Beth and wondering what had happened. “It’s been really good.”

I frowned. “I saw a croc down there earlier.”

“You better learn to stay up on your feet then,” he said with a grin. Then he turned to shout, “Evelyn’s first attempt at waterskiing coming up! Someone get a camera and everyone gather round for a laugh!”

“Thanks!” I said, following him to the boat.

It was so much fun. To everyone’s delight, it took me a while to get the hang of it, and there were a few hilarious false starts which saw me nose-diving into the water. Then I got a feel for it and managed to get up out of the water. Cam steered the boat down the river, picking up speed as we left the house behind. He glanced back occasionally and shouted encouragement.

“Let’s turn around and show them what a pro you are,” he said after a while. We headed back and a cheer arose as we passed the house with me standing relatively confidently on the skis. Joe had returned and I caught his eye. I was having such a great time and laughed loudly before we left everyone behind again. On my next drive by, I got a bit cocky and lifted an arm to wave. Disaster. I let the rope go as I lost my balance and crashed spectacularly into the water. Below the surface, I spent a moment upside down and confused before hitting the air again, coughing and spluttering. Joe was at the riverbank and crouched to my level.

“Think so,” I said, choking and reaching for his hand. “I lost the skis somewhere.”

“Don’t worry about it. Cam’ll get them. You scared me for a minute. Thought I was gonna have to brave the crocs and jump in after you!”

He pulled me out in one movement and I stumbled on my jelly legs, falling into him. “You okay?” he asked again.

“What happened?” Cam shouted, turning the boat around. “You think you’re the queen, giving everyone the royal wave?”

“I thought I was getting good,” I said, laughing.

About the Author:
Hannah Ellis lives in Munich with her husband and two little boys. She’s originally from England and has lived in America, Australia and Ireland. As well as writing, she also teaches English to kindergarten kids. In her spare time she likes to read books, drink tea and eat chocolate. She goes jogging regularly but hasn’t decided if she really enjoys it or not. She’s a huge fan of sunshine, and the many Munich beer gardens. 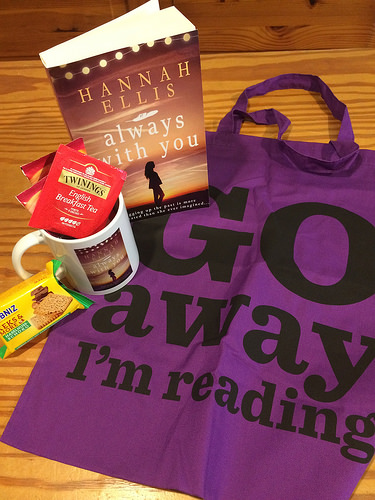 For a chance to win, enter the rafflecopter below:

2 thoughts on “Blog Tour: Always With You by Hannah Ellis @BooksEllis @lolasblogtours”