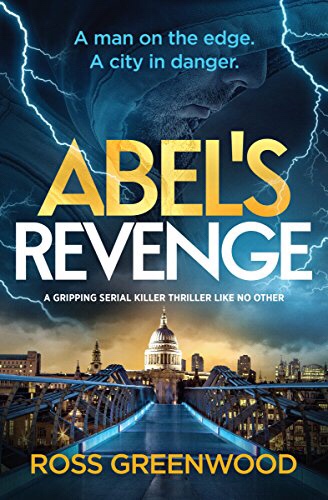 This is a story about a city. As with all others, it’s a place of violence. There are murderers, and they live among us.

This is also a tale about a couple — sometimes friends, occasionally lovers, but always partners. Dan and Olivia are fighting modern battles; the ones parents have over a lack of money, time or peace.

An escalating serial killer terrifies the streets and homes. The body count rises as their relationship crumbles. Society reveals its dark side, and no one is safe. Dan and Olivia experience this first-hand as danger closes in.

I’m so pleased to be helping to close down the blog tour for Abel’s Revenge today!

This was such an unusual serial killer thriller, you almost have two completely separate storylines running side by side, the only thing they have in common is the location. Olivia and Dan are an unmarried couple with two kids living in London and then Abel is a serial killer that’s stalking the streets and wrecking havoc. Olivia and Dan’s chapters read like a domestic suspense and then the little we do hear from Abel feels more like a standard serial killer thriller. This may sound like it wouldn’t work together but it really does, it was a compulsive page turner that had me glued to my Kindle.

While the bulk of the novel focuses on Olivia and Dan’s relationship woes there is an undercurrent of apprehension running in the background as everyone in the city is on edge waiting for Abel to strike again, it’s not a question of him attacking again, but rather where and how. He doesn’t follow any sort of pattern or MO, his attacks are random and unpredictable, which to me makes it even more frightening. Greenwood did a fantastic job at creating this atmosphere full of frantic citizens who are fearful for their safety as well as a killer who’s inner thoughts were terrifying and left me chilled.

There was some excellent dark, black humor to bring levity to an ominous situation, I always love that and find that sarcasm brings an edge to an already dark plot. I wouldn’t describe this as full of twists and turns, though there are some surprises to be found, but I actually appreciated that more, it made Greenwood’s clever plotting and solid writing shine brighter. If you’re looking for a unique crime fiction read give this one a shot!

Ross Greenwood’s second book, The Boy Inside, was picked up by Bloodhound Books, and in September 2017, Fifty Years of Fear was published. All his books are thought provoking, and told with a sense of humour.