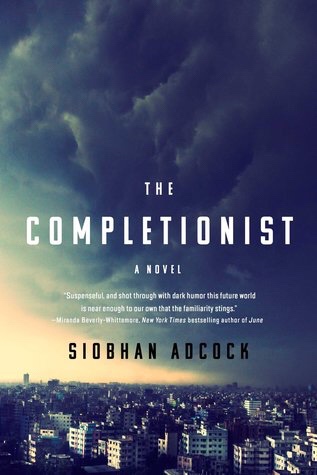 Find her. You need to keep looking, no matter what. I’m afraid of what might’ve happened to her. You be afraid too.

A young Marine, Carter Quinn, comes home from war to his fractured family, in a near-future America in which water is artificially engineered and technology is startlingly embedded in people’s everyday lives. At the same time, a fertility crisis has terrifying implications for women, including Carter’s two beloved sisters, Fred and Gardner. Fred, accomplished but impetuous, the eldest sibling, is naturally pregnant—a rare and miraculous event that puts her independence in jeopardy. And Gardner, the idealistic younger sister who lived for her job as a Nurse Completionist, has mysteriously vanished, after months of disturbing behaviour.

Carter’s efforts to find Gard (and stay on Fred’s good side) keep leading him back home to their father, a veteran of a decades-long war just like Carter himself, who may be concealing a painful truth that could save or condemn them all.

Dystopian fiction can be a tricky genre for me, it either works incredibly well or it just flat out doesn’t most of the time and The Completionist sounded like it would be one that worked well for me. On the whole it was excellent and there were many aspects that I enjoyed, but I had enough issues that I’m torn, I’m not even sure if I actually liked it or not, so bear with me while I try to explain my thoughts.

I’m gonna expand on the blurb just a bit because it doesn’t give enough detail for once. Carter has just returned home after being in the war, there is a huge water shortage and now even engineered H2.0 is not readily available unless you have money. No showers, no running taps period and a fertility crisis is rampant as well. Women only usually get pregnant by using Insemnia, again for the wealthy but his sister, Fred gets pregnant the old fashioned way and is considered a miracle. They live in New Chicago and the world building was pretty great, the premise was interesting and I loved both Fred and Carter’s characters. So what went wrong….

I can be pretty picky about endings of books, they can truly make or break it for me. I’ve bumped books up an entire star rating based on an amazing ending and I’ve also bumped them way down for a weak ending and if I’m being brutally honest this had one of the most disappointing endings I’ve encountered in a long time. Everything was great, I was predicting a solid 4 star read, the mystery surrounding Gard was intriguing and the writing was top notch. Then the book just ended. Zero resolution and way too many questions left unanswered for me, it irritated me enough to bump my rating way down. If there was a planned sequel I guess I wouldn’t be as annoyed, but I can’t get past all that time and being invested in the story to leave with no clear answers.

Thanks to the publisher and Booksparks for my review copy.

3 thoughts on “Review: The Completionist by Siobhan Adcock”