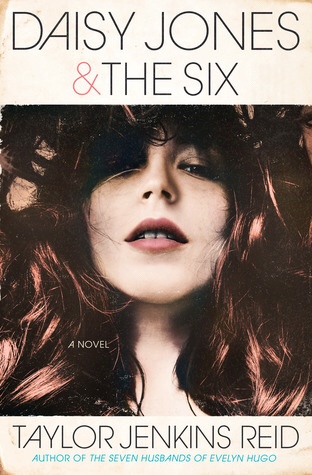 Everyone knows Daisy Jones & The Six, but nobody knows the reason behind their split at the absolute height of their popularity . . . until now.

Daisy is a girl coming of age in L.A. in the late sixties, sneaking into clubs on the Sunset Strip, sleeping with rock stars, and dreaming of singing at the Whisky a Go Go. The sex and drugs are thrilling, but it’s the rock and roll she loves most. By the time she’s twenty, her voice is getting noticed, and she has the kind of heedless beauty that makes people do crazy things.

Also getting noticed is The Six, a band led by the brooding Billy Dunne. On the eve of their first tour, his girlfriend Camila finds out she’s pregnant, and with the pressure of impending fatherhood and fame, Billy goes a little wild on the road.

Daisy and Billy cross paths when a producer realizes that the key to supercharged success is to put the two together. What happens next will become the stuff of legend.

The making of that legend is chronicled in this riveting and unforgettable novel, written as an oral history of one of the biggest bands of the seventies. Taylor Jenkins Reid is a talented writer who takes her work to a new level with Daisy Jones & The Six, brilliantly capturing a place and time in an utterly distinctive voice.

So as soon as I was approved for this one I immediately abandoned my other reads and dove right in. The Seven Husbands of Evelyn Hugo was one of my very favorite books last year so I knew I had to read this one right away. I had promised myself that I would wait to share my thoughts publicly until, oh I don’t know maybe the same calendar year the book is being released hahahaha but I can’t wait any longer, because you guys. This is an epic, phenomenal read that I will never forget. I’m scared to even try and write a review because no way can I do it justice but I have to try. Here goes!

The structure of this was amazing, it’s composed of oral interviews with the members of Daisy Jones and the Six and those people closest to them, so you have a large cast of characters to love. And I loved many of them. The band is clearly fictional but TJR has the uncanny ability to create these fake celebrities that feel so very real and authentic that you find yourself thinking, wait did I actually miss a huge band in the seventies called DJATS? She’s that good, I don’t know how she does it but she’s genius. Why are these characters so memorable? Because they’re so well developed, they’re larger than life and they just feel real. On top of outstanding characterization the story itself is a thing of beauty. It’s fun, wild, totally rock and roll but it’s also poignant, touching and incredibly moving. It is absolutely everything and it is a story for everyone.

If you’re a music fan in general, but especially if you loved (or still do!) music from Fleetwood Mac, Bruce Springsteen, etc this is a must read. TJR captures that era beautifully and will make you want to listen to it as a background while you’re reading. Once again this read like an epic saga of a group of people’s lives, an intimate inside look behind the scenes of band and I could not get enough of it. Also, Reese Witherspoon is making a TV show and I cannot wait! If you loved Evelyn you’ll adore this one as well, if you haven’t read Evelyn go catch up while we wait for it to come out and basically if you like reading in general just do yourself a favor and pre order it now. You’re welcome.

Daisy Jones and the Six in three words: Epic, Innovative and Moving.

23 thoughts on “Review: Daisy Jones and the Six by Taylor Jenkins Reid”