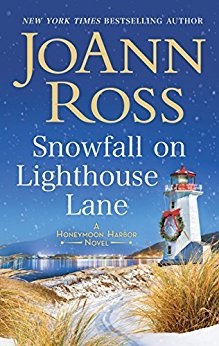 Lose yourself in the magic, charm and romance of Christmas in the Pacific Northwest as imagined in JoAnn Ross’s heartwarming Honeymoon Harbor series.

Growing up on the wrong side of the tracks, Jolene Harper is forever indebted to the mother who encouraged her to fly—all the way to sunny LA and a world away from Honeymoon Harbor. Although Jolene vowed never to look back, returning home isn’t even a question when her mom faces a cancer scare. Which means running into Aiden Mannion all over town, the first boy she ever loved—and lost—and whom she can barely look in the eye.

Aiden’s black-sheep reputation may have diminished when he joined the marines, but everything he’s endured since has left him haunted. Back in Honeymoon Harbor to heal, he’s talked into the interim role of police chief, and the irony isn’t lost on the locals, least of all Aiden. But seeing Jolene after all these years is the unexpected breath of fresh air he’s been missing. He’s never forgotten her through all his tours, but he’s not sure anymore that he’s the man she deserves.

Despite the secret they left between them all those years ago, snow is starting to fall on their picturesque little town, making anything seem possible…maybe even a second chance at first love.

Review:
Does anyone else love holiday movies like the ones on the Hallmark Channel? If so, this book totally reminded me of one and I wouldn’t be at all surprised to find out it will eventually be a made for TV movie. And while it definitely features holiday magic it’s not necessarily a Christmas book, in fact it covers the month of November as well as December making it the perfect read for now.
This is the second in a series but I did not read the first book and had no issues starting here. It’s set in a town called Honeymoon Harbor which is full of charming and interesting characters and is also complete with a quaint little setting making it an ideal sweet read.
Jolene was a typical and extremely likable heroine who comes back home to visit her mom and Aiden is a typical swoon worthy hero who is back home and acting as the temporary chief of police. What was not typical about the both of them (and the supporting characters) was that they felt genuine and their budding romance was incredibly tender and sweet which was just what I was in the mood for when I picked this one up. If you like second chance romances give this a try!
Snowfall on Lighthouse Lane in three words: Adorable, Charming and Effortless.
Overall rating: 4/5
Thanks to the publisher for my review copy.

One thought on “Review: Snowfall on Lighthouse Lane by JoAnn Ross”