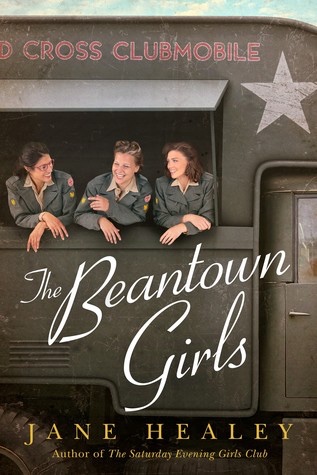 1944: Fiona Denning has her entire future planned out. She’ll work in city hall, marry her fiancé when he returns from the war, and settle down in the Boston suburbs. But when her fiancé is reported missing after being shot down in Germany, Fiona’s long-held plans are shattered.

Determined to learn her fiancé’s fate, Fiona leaves Boston to volunteer overseas as a Red Cross Clubmobile girl, recruiting her two best friends to come along. There’s the outspoken Viviana, who is more than happy to quit her secretarial job for a taste of adventure. Then there’s Dottie, a shy music teacher whose melodious talents are sure to bring heart and hope to the boys on the front lines.

Chosen for their inner strength and outer charm, the trio isn’t prepared for the daunting challenges of war. But through it all come new friendships and romances, unforeseen dangers, and unexpected dreams. As the three friends begin to understand the real reasons they all came to the front, their courage and camaraderie will see them through some of the best and worst times of their lives.

I’ve read my fair share of World War Two HF and I’m always eager to see a new spin on things, so when I read the description of this and realized I had never even heard of the Red Cross Clubmobile Girls I was excited! The idea of these young women volunteering to help out during such a scary and unsure time was fascinating to me and their bravery was so inspiring.

Historical accuracy is so important to me, even when reading fiction and Healey did an amazing job at staying very close to true events. Her dates were pretty spot on and her attention to detail was impeccable, and yet she still managed to make this an engaging and fun read despite maintaining historical accuracy. Sometimes when I read a HF I can get bogged down with the details but there was none of that here. I was wholly invested in Fiona, Viv and Dottie’s lives and this is due to the authors ability to create such vivid and vivacious characters that leapt from the pages.

This was an emotional read, Healey didn’t shy away from the horrors of war and the girls were right in the thick of the action so there were some somber scenes. Overall though, this was an ultimately uplifting read and one full of hope, but I did experience a wide variety of emotions while reading. Recommended for fans of HF and especially those who can’t get enough of WW2, also the whole concept behind the Clubmobile Girls was so interesting, their sole purpose was to bring some joy and happiness to soldiers far from home, so cool!

The Beantown Girls in three words: Heartwarming, Precise and Impassioned.

6 thoughts on “Review: The Beantown Girls by Jane Healey”