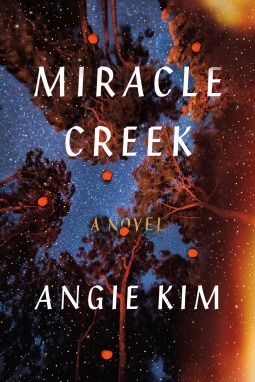 My husband asked me to lie. Not a big lie. He probably didn’t even consider it a lie, and neither did I, at first . . .

In the small town of Miracle Creek, Virginia, Young and Pak Yoo run an experimental medical treatment device known as the Miracle Submarine—a pressurized oxygen chamber that patients enter for therapeutic “dives” with the hopes of curing issues like autism or infertility. But when the Miracle Submarine mysteriously explodes, killing two people, a dramatic murder trial upends the Yoos’ small community.

Who or what caused the explosion? Was it the mother of one of the patients, who claimed to be sick that day but was smoking down by the creek? Or was it Young and Pak themselves, hoping to cash in on a big insurance payment and send their daughter to college? The ensuing trial uncovers unimaginable secrets from that night—trysts in the woods, mysterious notes, child-abuse charges—as well as tense rivalries and alliances among a group of people driven to extraordinary degrees of desperation and sacrifice.

Angie Kim’s Miracle Creek is a thoroughly contemporary take on the courtroom drama, drawing on the author’s own life as a Korean immigrant, former trial lawyer, and mother of a real-life “submarine” patient. An addictive debut novel for fans of Liane Moriarty and Celeste Ng, Miracle Creek is both a twisty page-turner and a deeply moving story about the way inconsequential lies and secrets can add up—with tragic consequences.

I’m going to start by telling you that the hype and buzz surrounding this book is totally warranted, I had very high expectations after hearing from some of my most trusted friends that this was an incredible book and it exceeded them by a mile. The fact that this is a debut blows my mind, you know those rare debuts that take the literary world by storm? This is that book, it’s going to be huge and will be an extremely popular choice for book clubs for years to come, mark my words.

I don’t have the best track record with literary mysteries, I’ve only seriously enjoyed a couple but this was the best one I’ve ever read, hands down. Sometimes literary fiction in general feels like it’s trying too hard for me, all the flowery descriptions and ramblings tend to make my eyes glaze over but Kim wrote in a literary style that was pure magic. From the incredibly well crafted characters to the descriptions of the town of Miracle Creek and even to the retelling of the events of a tragedy through the eyes of several individuals, I was mesmerized, it was a totally magical reading experience.

You hear from several key people who were present the day of the accident and the story unfolds over the course of four days of trial testimony. Seeing how everyone involved had such different experiences and outlooks about not only the day in question, but also their memories from the months leading up to the event were endlessly fascinating as well. Choices played a huge role here too, how even the smallest, most seemingly innocuous decisions can have a huge impact was another thing that kept me riveted. The idea that a mundane day and a series of basic everyday choices can have consequences that add up to something no one ever saw coming still gives me the chills.

Any book with a character that has a special needs child draws me in, no matter what the subject matter, but when you have a group of parents of special needs kids and their struggles are so painfully honest and relatable, I’m a mess. This is the second book I’ve read this year that deals directly with ASD and also the second that portrays the daily life as a caretaker and advocate in such an accurate manner that I’m totally shook. Kim tapped into some of my innermost thoughts and fears about my own son, the dark and ugly fleeting things that fly through my head from time to time that once again, I felt seen, exposed even. It’s a powerful feeling making this already unforgettable book one that has earned its place as one of my favorite books of all time.

I’ll stop gabbing because we could be here all week if I don’t, but I recommend this one to everyone. If you like to read, add this one to your TBR. It’s incredible and not to be missed.

Thanks to Broadside PR for my review copy.