She got into bed but sleep didn’t come easily. Every creak in the house made her alert. She was waiting for him to come and get her.

The small city of Stockleigh is in shock as three women are brutally attacked within days of each other. Are they random acts of violence or is there a link between the victims? For Detective Eden Berrisford, it’s her most chilling case yet.

The investigation leads Eden to cross paths with Carla, a woman trying to rebuild her life after her marriage to a cruel and abusive man ended in unimaginable tragedy. Her husband Ryan was imprisoned for his crimes but, now he’s out and coming for her.

As Eden starts to close in on the attacker, she also puts herself in grave danger. Can she stop him before he strikes again? And can Carla, terrified for her life, save herself – before the past wreaks a terrible revenge?

I couldn’t be any happier to welcome you to my stop on the blog tour for Don’t Look Behind You today! Catch up on the other stops for reviews and extracts.

This is the second book in the Eden Berrishford series, I loved the first one, (you can find my review here) so I’ve been impatiently awaiting this book as I knew we would be finding out more about Eden and her past. This book sees Eden and her team looking into the brutal attacks on several local women. Simultaneously, Eden is trying to keep Carla safe, a woman who is always looking over her shoulder especially now as her absuive ex husband has just been released from jail. Lots going on here, this one is the definition of a page turner.

All of the different scenarios here revolve around abused women making for a disturbing read, yet one that is relevant and sadly, true to life. Eden is trying to catch the man responsible for physically and sexually assaulting local women, then she works with a shelter called the Willows that provides a safe haven when battered women have no where else to turn. Carla is one of these abused women, but she works there now and does her best to keep everyone safe. Her ex, Ryan will never fully let her go and her story really pulled at my heartstrings. It’s told slowly, in flashbacks starting twenty one years ago and the truth about the events that led to him being locked away were sad and terrifying.

I loved getting to know more about Eden personally as well as professionally. Danny, her estranged husband is back, but in what capacity? She’s still dating Joe but Danny’s reappearance puts a strain both on her relationship with Joe and her daughter Casey. The whole situation is left unfinished, leaving the door wide open for book three and there could be serious implications for Eden in the future.

Sherratt has a knack for creating very relatable characters in a short timeframe, her books are rapidly paced and extremely engaging, yet she still manages to forge a connection between the reader and the characters. Her writing style is also very realistic which is almost creepy as you can easily picture the situations she crafts being ripped from the headlines. I read this book in a single day, it really kept me on the edge of my seat as things heated up and ended in a astonishing conclusion, but one that was wholly justifiable. 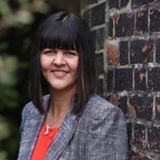 Mel Sherratt writes gritty crime dramas, psychological suspense and fiction with a punch – or grit-lit, as she calls it. Shortlisted for the CWA (Crime Writer’s Association) Dagger in the Library Award 2014, she finds inspiration from authors such as Martina Cole, Lynda la Plante and Elizabeth Haynes. Since 2012, all nine of her crime novels have been bestsellers. Four of her books are published by Amazon Publishing’s crime and thriller imprint, Thomas & Mercer and she has a new series out with Bookouture.

Mel lives in Stoke-on-Trent, with her husband and terrier, Dexter, named after the TV serial killer, and makes liberal use of her hometown as a backdrop for some of her books.

2 thoughts on “Blog Tour: Don’t Look Behind You by Mel Sherratt @writermels @bookouture ”