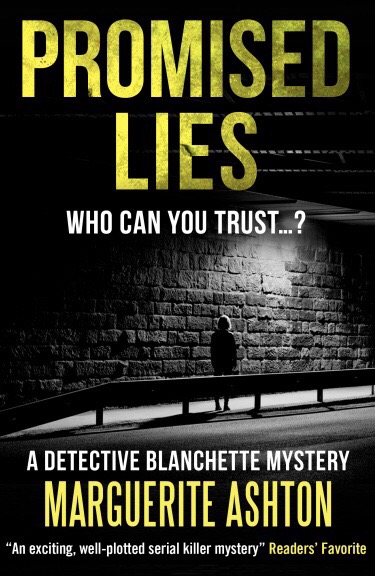 Detective Lily Blanchette has a lot on her plate. Her sister, Celine, was murdered, her parents are on the verge of divorce, and after a whirlwind romance, she married a man she barely knows.

When the bodies of two young women are found, it is clear that the killer is the same person who murdered her sister, Lily sets out to find out who that is.

As the investigation comes to life, Lily realises that all is not as it seems in her life, who can she actually trust and who is she?


Welcome to my stop on the blog tour for Promised Lies, I have an author interview to share today!

Twitter, 140 characters forces you to be more creative with your posts.

Which book character do you wish you had written?

Why did you write a book?

This was my way of expressing to my readers, snapshots of life, and how I see and solve problems within them.

Why did you choose your particular genre?

I am drawn to the drama, and need to show how reality can make great fiction.

If you had to write in a different genre, which would you choose?

What’s the worst thing about writing a book?

Writing the first draft without self-editing…free flowing is hard to achieve.

What’s the best thing about writing a book?

Rewrites – My writing mentor taught me to take the good and improve it, polish and even surprise myself with a potential, alternative ending.

If you could be anyone for the day, who would you be?

Steven Spielberg, so I could get a behind the scenes look at creating a world class make believe environment for his characters and viewers.

Thanks so much to Margeurite for joining me today.

When Marguerite Ashton was in her twenties, she took up acting but realized she preferred to work behind the camera, writing crime fiction. A few years later, she married an IT Geek and settled down with her role as wife, mom, and writer. Five kids later, she founded the Crime Writer’s Panel and began working with former law enforcement investigators to create; Criminal Lines Blog, an online library for crime writers who need help with their book research.
She’s a workaholic who hides in her writer’s attic, plotting out her next book and stalking Pinterest for the next avocado recipe.
A member of Sisters in Crime, Marguerite grew up in Colorado, but is now happily living in Wisconsin and playing as much golf as possible. She can be found on Twitter and Facebook.

One of two ebooks