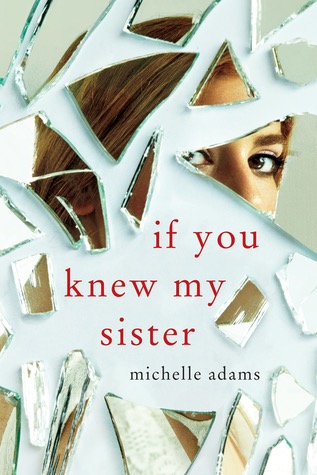 In the vein of Ruth Ware’s In a Dark, Dark Wood comes a novel of psychological suspense form debut author Michelle Adams, where a woman returns to her family’s home to learn the truth and escape her sister’s influence

If you knew my sister, you’d run too…

First there was the Robert Kneel incident.

Then what happened to Margot Wolfe.

And now she’s found me again.

Dr. Irini Harringford was given away by her parents just before her fourth birthday. Although she has spent her whole life trying to convince herself she doesn’t need them, deep down Irini longs to understand why she was abandoned, while her parents kept her older sister, Elle.

So when Elle gets in touch with news that their mother has died, Irini reluctantly agrees to return to the family home. But she is ill at ease. She and Elle are not close. Irini knows only too well what Elle is capable of. Inexplicably drawn to her enigmatic sister, yet terrified of the sway she holds, Irini tries to protect herself even as she is sucked back into her family’s toxic web of secrets…and soon realizes that the past is more complicated than she imagined, and that her very future rests upon discovering the truth about why she was really given away.

Ahh sister relationships never fail to intrigue me, especially messy ones and Irini and Elle have one of the most complex relationships I’ve read about in awhile. Irini was sent to live with relatives when she was just three and she has no idea why, so when her mother dies and Elle summons her back home the idea of finally finding out some answers is too much for her to resist. Elle is toxic, manipulative and calculating but she is Irini’s sister and her hold on her is very strong.

I was dying to learn exactly why Irini was sent away and to find out if Elle was really as crazy as Irini remembered, there was definitely that sense of uneasiness about both women throughout. Elle is clearly unbalanced but there were times that something about Irini seemed off as well. There was a heavy ominous undertone, something sinister and creepy lurking around that I really liked, it messed with my head in the best possible way. Put that together with really strong writing and I’m super impressed it was Adams debut, she has a subtle, nuanced style that worked really well for me.

There was something intoxicating about this book, it almost had me in a hypnotic state while I was reading it, I was that captivated by it. Despite it being a true psychological thriller I found it to be heavy on the psychological aspect and pretty light on the thriller part, but that did not in any way stop my enjoyment of this one. I actually think it further enhanced my experience and forced me to savor this read instead of rushing through it like I sometimes do in a twisty, fast paced thriller.

9 thoughts on “Review: If You Knew My Sister by Michelle Adams”