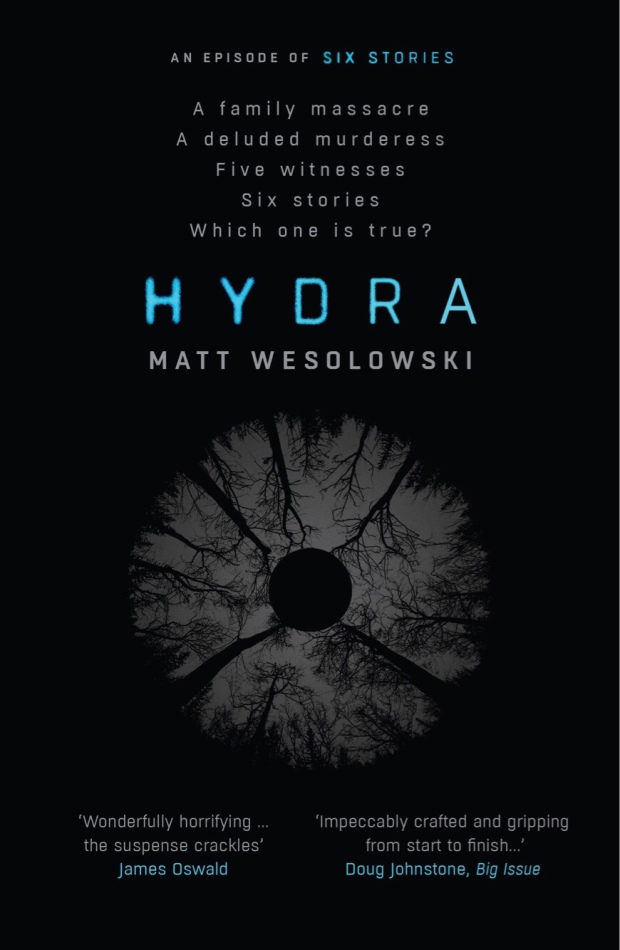 One cold November night in 2014, in a small town in the north west of England, 26-year-old Arla Macleod bludgeoned her mother, father and younger sister to death with a hammer, in an unprovoked attack known as the “Macleod Massacre.” Now incarcerated at a medium-security mental-health institution, Arla will speak to no one but Scott King, an investigative journalist, whose Six Stories podcasts have become an internet sensation. King finds himself immersed in an increasingly complex case, interviewing five witnesses and Arla herself, as he questions whether Arla’s responsibility for the massacre was a diminished as her legal team made out. As he unpicks the stories, he finds himself thrust into a world of deadly forbidden “games,” online trolls, and the mysterious Black-eyed Children, whose presence extends far beyond the delusions of a murderess.

I’m absolutely thrilled to be one of the stops on the blog tour for Hydra today!

I spent much of my time last year raving about Six Stories which is Wesolowski’s debut. This book truly blew me away, it was unlike anything I’ve ever read before so to say Hydra was one of my most anticipated reads of 2018 is an understatement. Once again, this book knocked me out and just proves that Wesolowski is a powerhouse and one of the strongest, most unique voices in crime fiction today.

While Hydra is technically the second book in a series you don’t have to read SS first, but you would be missing out if you didn’t. Both books feature Scott King the host of a podcast and each book tackles a new case. The format of these books is one of the best parts, they’re delivered podcast style, broken up into six sections with a new interviewee each time. If you’re a fan of crime podcasts like Serial this is a must read. There’s something so current and timely about the structure that makes this series a real standout.

One of my favorite things about SS was how creepily atmospheric it was and Wesolowski takes things to the next level here. I am not a wimp, I read some pretty disturbing books but this scared the daylights out of me! I was at about the halfway point late one night and had no intention of stopping until I finished but I did have to pause a few times because I was so scared!! His writing is that good, there is no escaping the menace that is lurking between the pages and the setting is so immersive you are absolutely consumed by it.

The plotting is meticulous, every section is laying the groundwork for what’s ahead and with each gasp worthy reveal I was shocked. This doesn’t hinge on one massive twist but rather has several moments of surprise that will astound you and make you applaud the author for his craftiness, I still can’t get over the resolution, bravo Mr. Wesolowski, bravo.