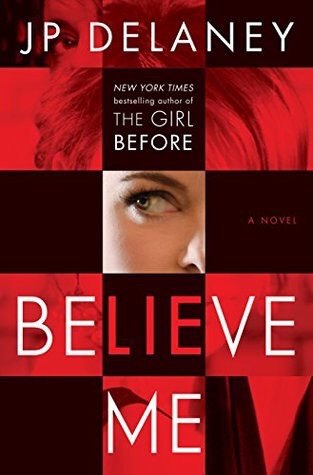 One out-of-work British actress pays the rent on her New York City apartment the only way she can: as a decoy for a firm of divorce lawyers, hired to entrap straying husbands. When the cops begin investigating one of her targets for murdering his wife–and potentially others–they ask her to lure the suspect into a confession.

But with the actress pretending to be someone she isn’t, differentiating the decoy from the prey becomes impossible–and deadly.

While I totally loved Delaney’s debut, The Girl Before it had mixed reviews among my Goodreads friends and one of the biggest complaints was that the entire story didn’t seem plausible. I’m generally not bothered by that, I read fiction because the idea of something far fetched happening intrigues me to no end, so I ended up on the love it side of the fence. This time around I wasn’t as pleased, I didn’t actively dislike Believe Me but I definitely did not enjoy it as much as TGB and I think it’ll be another polarizing read.

Claire is a typical psychological thriller narrator, her reliability is questionable and she’s extremely interesting because of it. She’s broke and new to NYC and desperately wants to stay, she has no desire to go back home to London so when she gets an opportunity to make some fast cash as a decoy she happily accepts. I never really liked her as a character but she did fascinate me, her motivation wasn’t clear and she definitely kept me guessing. There was a sense of the same addictive writing style here as in TGB and I definitely was curious about how things would end, but I wasn’t even half as invested which is troubling.

I found the premise to be somewhat believable but the things that followed were outrageous and wild. I really don’t want to spoil anything but everything from the decisions that Claire made to the outlandish directions Delaney took the story left me pretty unsatisfied. It was one of those books that got worse as I got further along instead of better and I just couldn’t muster up any excitement in the end. If you don’t mind suspending all disbelief while reading then maybe this will work better for you though as it is really well written and a pretty fast read.