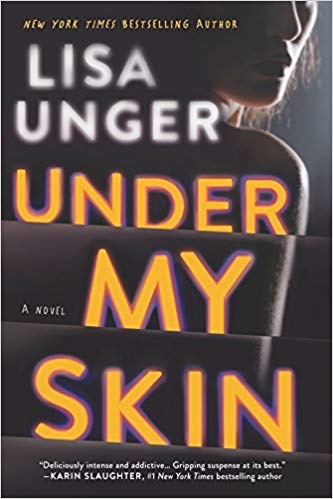 What if the nightmares are actually memories?

It’s been a year since Poppy’s husband, Jack, was brutally murdered during his morning run through Manhattan’s Riverside Park. In the immediate aftermath, Poppy spiraled into an oblivion of grief, disappearing for several days only to turn up ragged and confused wearing a tight red dress she didn’t recognize. What happened to Poppy during those lost days? And more importantly, what happened to Jack?

The case was never solved, and Poppy has finally begun to move on. But those lost days have never stopped haunting her. Poppy starts having nightmares and blackouts—there are periods of time she can’t remember, and she’s unable to tell the difference between what is real and what she’s imagining. When she begins to sense that someone is following her, Poppy is plunged into a game of cat and mouse, determined to unravel the mystery around her husband’s death. But can she handle the truth about what really happened?

I’m so thrilled to be one of the stops on the blog tour for Under My Skin today! If you would like to follow along with the tour check out TLC Book Tours for the full schedule.

Talk about a book that will make your head spin!! I will admit for the first bit I was slightly confused but I think that’s mostly due to the fact the Unger is such a fantastic writer that she just drew me into the tangled web that is Poppy’s life so wholly. Once I caught on I was utterly hooked, and found myself totally caught up and invested in this one.

I haven’t so strongly felt a characters paranoia and unease since The Woman in the Window, I had similar feelings while reading this especially as I could not for the life of me figure out if Poppy was insane or not. She teeters back and forth between seeming mostly sane and then she goes off the rails, she has crazy dreams and has problems separating her dreams from what’s actually happening and I couldn’t begin to figure out what was actually going on and what was part of her delusion. Add in a penchant for popping pills and she was one hot mess but she was sympathetic. She’s deep in the throes of grief and I couldn’t help but feel sorry for her even if her decision making skills were severely lacking.

This was just really well executed overall, the writing is top notch and the plot itself was gripping as well. Poppy was extremely well developed and highly complex, love her or hate her she was endlessly fascinating and I couldn’t wait to see how things would play out for her. Fans of Unger will be pleased and new readers will be happy to discover a talented new author.

Under My Skin in three words: Wild, Unnerving and Unreliable.

Lisa Unger is the New York Times and internationally bestselling, award-winning author of sixteen novels, including the new psychological thriller UNDER MY SKIN (coming Oct 2!)

Her books are published in twenty-six languages worldwide, have sold millions of copies and have been named “Best of the Year” or top picks by the Today show, Good Morning America, Entertainment Weekly, Amazon, Indie Booksellers, Goodreads, and Sun-Sentinel to name a few.

Her essays have appeared in the New York Times, Wall Street Journal, NPR and Travel+Leisure Magazine. Lisa Unger lives in the Tampa Bay area of Florida with her husband, daughter and labradoodle.

7 thoughts on “Review: Under My Skin by Lisa Unger”