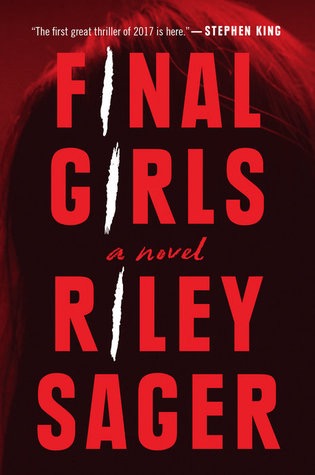 Ten years ago, college student Quincy Carpenter went on vacation with five friends and came back alone, the only survivor of a horror movie–scale massacre. In an instant, she became a member of a club no one wants to belong to—a group of similar survivors known in the press as the Final Girls. Lisa, who lost nine sorority sisters to a college dropout’s knife; Sam, who went up against the Sack Man during her shift at the Nightlight Inn; and now Quincy, who ran bleeding through the woods to escape Pine Cottage and the man she refers to only as Him. The three girls are all attempting to put their nightmares behind them, and, with that, one another. Despite the media’s attempts, they never meet.

Now, Quincy is doing well—maybe even great, thanks to her Xanax prescription. She has a caring almost-fiancé, Jeff; a popular baking blog; a beautiful apartment; and a therapeutic presence in Coop, the police officer who saved her life all those years ago. Her memory won’t even allow her to recall the events of that night; the past is in the past.

That is, until Lisa, the first Final Girl, is found dead in her bathtub, wrists slit, and Sam, the second, appears on Quincy’s doorstep. Blowing through Quincy’s life like a whirlwind, Sam seems intent on making Quincy relive the past, with increasingly dire consequences, all of which makes Quincy question why Sam is really seeking her out. And when new details about Lisa’s death come to light, Quincy’s life becomes a race against time as she tries to unravel Sam’s truths from her lies, evade the police and hungry reporters, and, most crucially, remember what really happened at Pine Cottage, before what was started ten years ago is finished.

Final Girls first came onto my radar last year, I saw someone talking about it on Twitter and when I read the blurb, I was so intrigued! Since then, I’ve seen this book everywhere on social media, it’s getting all of the hype. That always slightly concerns me, I wonder if the hype will be justified or just a major letdown? Let me tell you, the hype is deserved, dare I say this will be THE thriller of the summer?! It really should be.

Quincy is a final girl, along with Sam and Lisa, but what is a final girl? It’s a nickname for the last girls standing in a slasher film and the press dubbed the girls with the ubiquitous title because all three survived  horrifying massacres. For some reason, before I started this, I thought they were survivors of the same killer, but that’s not it, they all managed to escape from three separate spree killers. I really liked that they were only connected by being survivors, their three ordeals were all chilling and absolutely frightening.

This is told from Quincy’s viewpoint in the present day and there are also sections set in Pine Cottage where her horror show occurred. The pace is steady until you get closer to the end as you really start to learn about what happened at PC. I loved those parts, the setting was eerily atmospheric and so creepy, exactly like a horror movie. This book toes the line and almost crosses over into the horror genre, especially in these parts because the scenes are so dark, disturbing and gory.

There are tons of diversions throughout the book, it’s a constant guessing game that you can’t quite ever figure out. It’s so twisty and spooky, certain scenes gave me chills up and down my spine. All of the characters behave in a way that makes you question their motivations, no one is trustworthy, making this one all the more fun to try and figure out. It was such a compelling, thrilling read, again I’m calling it the book of the summer, don’t miss out on this one!